Spain’s café culture is crammed full of regional idiosyncrasies that make ordering your coffee of choice harder than you might expect. Here’s everything you need to know to get your caffeine fix a la española.

Spaniards may not be the biggest coffee consumers in the world (a 2017 study by the International Coffee Organisation found they weren’t even in the top 20), but they certainly have the same passion and tradition for café as their Mediterranean counterparts.

In fact, breakfast (first thing rather than mid-morning) for many in Spain consists of only coffee rather than adding any food to the mix. So much for it being the most important meal of the day!

Spaniards tend to prefer to have milk coffee to wake up in the morning and then wait for a stronger brew after lunch or during the afternoon.

It’s also worth noting that coffee is drunk by and large in bars and cafeterias rather than at home. If they’re at work, Spaniards will pop out for a coffee break with their colleagues and if meeting with friends they’re also more likely to sit outdoors in a terraza than invite each other round their homes for a brew.

It’s fair to say that the ritual and socialising that comes with coffee counts more than actually getting a caffeine fix. What kind of coffee do Spaniards drink?

Coffee in Spain is brewed by and large the espresso way. That means that the amount served is generally smaller and less watered down than in northern European countries, but often packs a lot more punch.

That means it’s usually served in small glasses or cups rather than in the kind of big mugs used by Starbucks.

Spanish coffee is unique in that most of it is torrefacto, which means that the coffee grain has 15 percent of sugar added to it before it is roasted.

This gives it a distinctively bitter and stronger taste, even though one might think that it would end up tasting sweeter, as the sugar burns and coats the beans giving them a black sheen.

The torrefacto tradition dates back to the Spanish Civil War as the cost-cutting practice meant the coffee beans were preserved for longer and increased the roast volume.

Even though there are critics who argue it spoils the taste, Spaniards are so used to torrefacto coffee that they’ve come to expect it as the standard.

How do I order a coffee in Spain?

If you’re new to Spanish coffee, don’t assume that the fact that it’s mainly torrefacto will mean you only get a dark, thick and bitter brew every time you order.

There’s a colourful and varied array of regional coffee preparations which we’ll go over in the next section, but you’ll be able to make yourself understood all over Spain with the following general terms:

Americano: Same as a café solo but with more water to make it less strong

Cortado: A small cup of espresso with a dash of milk

Cappuccino: Same as everywhere else around the world, many bars in Spain will serve them

If you don’t speak any Spanish, don’t worry too much about uttering anything other than the coffee you want. Saying me pone (give me) before your order will suffice, but no need even to say por favor (politeness isn’t too important among Spanish waiters).

How about ordering coffee in Spain’s different regions?

If you’re feeling a bit more adventurous and want to delve into the coffee culture of your particular region in Spain, here are the most distinctive cafés for individual Spanish autonomous communities.

Mitad y mitad: Coffee with half hot milk and half cold milk Cortado largo: A long short one is the literal name but it’s actually just a cortado with more milk or more coffee, so you have to specify what you want more of.

Barraquito: A cortado with milk and extra condensed milk commonly drunk in Tenerife. It can also be served with cinnamon, a slice of lemon peel and a splash of Licor 43 liqueur. The condensed milk version is also known as cortado condensada across the Canaries. (Photo: Erik Streb/Wikimedia)

Leche y leche: A bigger version of a barraquito or cortado condensada, with more milk (hence the double leche).

Café asiático: Black coffee with condensed milk and flambéed brandy or rum and a sprinkle of cinnamon.

Café caleta: a carajillo coffee with rum and brandy as well as lemon and orange peel. Served in Ibiza.

Rebentó: Carajillo coffee with local rum, served on the island of Majorca. Blanco y negro: Despite it’s simple name (black and white) it’s anything but. It combines iced or frapped espresso coffee with Spanish ice cream or leche merengada (a milkshake made with milk, egg white and sugar).

Suspiro horchata: Horchata drink with a splash of coffee.

Tocaet (tocado) Valenciano: Coffee with a few drops of brandy or other liquor.

Catalán: coffee with crema catalana, the regional version of crème brûlée (pic below).

Cigaló: Carajillo coffee with rum served in a tall glass, somehow gets its name from the word for langoustine, cigala.

Ebaki: The Basque name for a cortado coffee. In San Sebastian it’s served as a tall milk coffee with lots of sugar.

Sombra: Translating to shadow, this coffee served in Malaga contains 80 percent milk and 20 percent coffee. In fact, Malaga has its own vernacular for its coffees, so this cheat sheet should help you along. 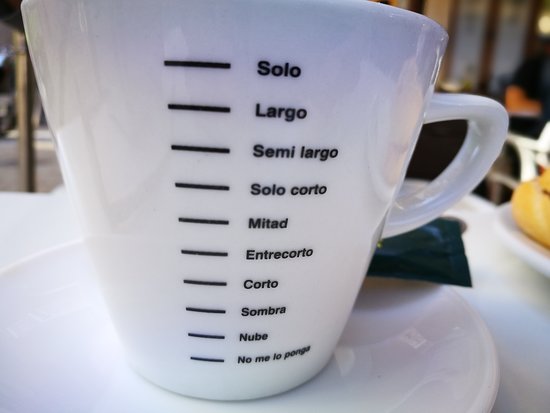 If you’re buying coffee at a Spanish supermarket, be aware that some packets are labelled as mezcla (mixture), which basically means that the coffee is blended with chicory or torrefacto. Opt instead for natural if you want unadulterated coffee.

When ordering coffee with milk, ask for leche del tiempo (room temperature milk) or leche templada (warm milk) unless you want it to be piping hot, as the standard practise is for the milk to be almost boiling hot.