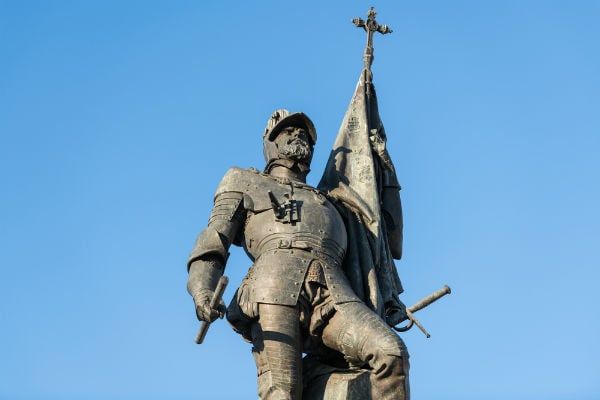 A statue of Hernán Cortés in Medellin, Extremadura. Photo: orensbruli/Depositphotos

Who was Hernán Cortés?

The body of Hernán Cortés, the conquistador who launched three centuries of Spanish rule in Mexico, today  lies all but forgotten in a Mexico City church, even as a new debate rages over his legacy.

The story of how it got there is as complicated and dramatic as the conquest itself, launched 500 years ago when Cortés, a talented, cunning and ambitious adventurer, defied his boss' orders and sailed off to conquer the Aztec empire.

That violent collision between the Old and New Worlds surged into the headlines this week when Mexican President Andres Manuel Lopez Obrador called on the king of Spain and the pope to apologize for the abuses of the conquest drawing a resentful response.

Amid the row, the remains of the Spaniard who started it all lie in oblivion in the Mexican capital, a silent reminder of both countries' shared past.

It is an unlikely fate for a man who rose from nothing to conquer an empire and build another in its place, winning fame and fortune along the way. Cortés was a smart but rebellious thirty-something when he launched the conquest in 1519 — defying his boss, the governor of Cuba, who had told the young official to stay put on the newly colonized island.

Instead, Cortés not only set sail for the mainland, but destroyed his own ships on arrival, leaving his several hundred men little choice but to try and colonize it.

With the help of horses, swords, guns and smallpox — all unknown in the New World — and alliances with other indigenous groups, Cortés overthrew the Aztec empire in 1521, claiming it for Spain.

He governed the new colony for several years, but was haunted by his own insubordinate streak: legal problems and frayed relations caused by his defiance of the nobility would dog him the rest of his life.

Cortés died in Spain in 1547, aged about 62, diseased and indebted.

In his will, he asked his family to build a convent south of Mexico City and bury him there. But that never happened.

Buying time, Cortés' heirs put his body in a mausoleum in Seville, then moved him to a nearby tomb three years later when another noble needed the space.

That was just the beginning.

“His remains have been moved from place to place” for centuries, Mexican writer Hector de Mauleon told AFP.

Cortés' family finally sent his remains to Mexico in 1566. He was buried near his mother at a church north of Mexico City.

In 1629, Cortés' last male heir died, and the colonial government ordered Cortés reburied alongside him in the capital's Franciscan monastery in a lavish ceremony.

Cortés' bones — now in a velvet-lined urn — were later transferred to the monastery's altar, locked with a key that passed from one generation of monks to the next.

In 1790, he was moved again, to a stately tomb inside the church that adjoins the Hospital de Jesus, the first hospital in the Americas, which he founded.

But then Mexico declared independence in 1810.

By 1823, “Mexico City was aflame with pamphlets, with calls to kick out the Spanish, to dig up Cortés' remains and drag them through the streets,” said De Mauleon.

A conservative historian and writer, Lucas Alaman, decided not to let that happen. He slipped into the church and removed Cortés' body from its tomb.

For more than a century, its whereabouts were a mystery. Historians speculated it was in Spain or Italy.

Then, in 1946, a refugee of the Spanish civil war and a Cuban student invited the historian Francisco de la Maza to a secretive meeting. There, they told him they had a letter left by Alaman with a map to Cortés' body.

The remains, it turned out, were just meters from where Alaman had taken them, sealed inside a wall at the very same church.

With the government's permission, De la Maza led a secret excavation — and found what experts confirmed was Cortés's body.

It was a far cry from the image of the virile young conquistador, said De Mauleon.

“He had one tooth, various injuries sustained in combat, and his bones seemed eroded by venereal disease,” he said.

The government ordered the body returned to the same spot. Today, it is marked by a discrete plaque: “Hernán Cortés, 1485-1547.”

Pastrana criticized Mexico's request to Spain — two countries that didn't even exist as such at the time — and said the idea of good “Indians” versus evil conquistadors was overly simplistic.

“We have to try to understand these figures in their enormous complexity,” he said.

“Two civilizations… met without a single reference point. It's as if we went to Jupiter and found another civilization.”

Spanish academic Guillermo Seres said it was “unjust” that Cortés, “a man of action, but also… of science and letters,” had been cast as a villain.

“He has come to represent everything bad in Spanish history,” he said.