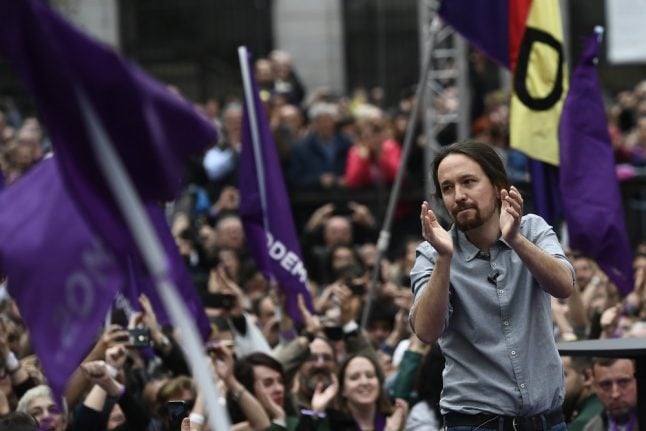 Born from the protest movement that swept Spain during the financial crisis, Podemos established itself in parliament in 2015, but now faces internal divisions and a challenge from a new far-right party.

Podemos, which once looked set to become the country's dominant left-wing force, risks crashing in a snap general election next month.

With his leadership increasingly contested, Pablo Iglesias tried to reunite the party on Saturday night, returning to the public eye after three months' paternity leave.

“I know I have disappointed a lot of people,” Iglesias, 40, told a rally in front of the Reina Sofia art museum in Madrid.

“We have brought shame on ourselves with our infighting.”

Podemos “is in crisis, tearing itself apart,” said one supporter at the rally, Betzie Jaramillo, 62.

Its founders “have realised the reality of power and its dark side”.

Iglesias's former right-hand man Íñigo Errejón announced in January he will run in regional elections in May as part of an open political platform instead of with Podemos, sparking an internal crisis.

The crisis deepened on Thursday with the surprise announcement by the party's top candidate for European Parliament elections in May, Pablo Bustinduy, that he would no longer run.

Spain votes in general elections on April 28th, and regional, local and European Parliament elections on May 26th.

“It seems like its electorate is unmotivated and demobilised,” said Pablo Fernandez Vazquez, a political scientist at the University of Pittsburgh who specialises in Spanish politics.

Podemos once led the polls and nearly snatched the leadership of Spain's left from Prime Minister Pedro Sanchez's Socialists at the last general election in 2016.

It finished third, winning 71 seats in the 350-seat parliament, up from 69 seats in a December 2015 election when it first entered the assembly.

But it could lose nearly half of its deputies in next month's general election, according to an average of polls published Monday in daily newspaper El Periodico de Catalunya.

The polls indicated the party would win just 38 seats. The Socialists would see their number of seats jump to 114 from just 84 in the outgoing assembly.

Podemos's internal bust-ups, combined with a scandal over Iglesias's controversial decision to buy a 600,000- euro ($683,000) house near Madrid with his partner Irene Montero, Podemos's number two, have cost the party support.

“Voters who cast their ballots for them with enthusiasm no longer see them as a novelty, but as a consolidated party,” said Ernesto Pascual, a political science professor at the Open University of Catalonia.

Formed in 2014 vowing to fight corruption and economic inequality, Podemos “has lost the ability to set the political agenda,” added Vazquez.

Since Sanchez came to power in June the Socialists have “eaten into” part of the space occupied by Podemos, he added.

The Socialists were swept into office after winning a surprise no-confidence motion against conservative leader Mariano Rajoy last year with the key support of Podemos.

In the upcoming election Podemos will also face competition from new far-right party Vox, which is targeting disgruntled voters in the same working class urban districts that fuelled the rise of Podemos.

The year started off badly for Podemos, with the split between Iglesias and Errejon.

“There needs to be a greater effort to open up more,” Errejon told news radio Cadena Ser on Monday. That was seen as a criticism of Iglesias's highly centralised leadership style.

“The complaint of those who have left is that the idea of internal democracy” which was key during the creation of the party has “transformed into a hyper-leadership” by Iglesias, said Pascual.