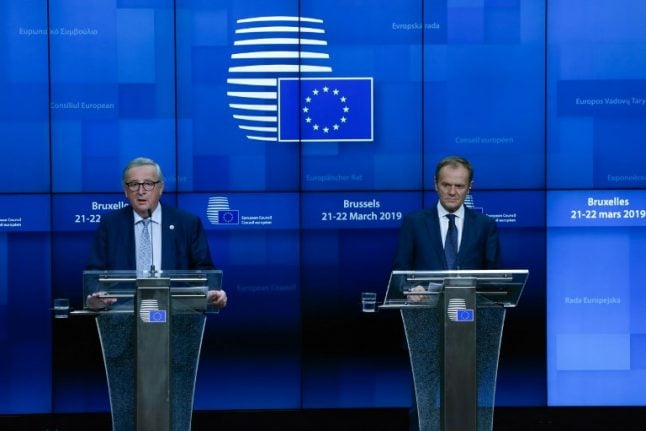 There will be no Brexit for at least April 12th – just under three weeks.

The EU unanimously agreed at the European Council summit in Brussels to approve a short extension to Article 50, albeit with distinct conditions.

Theresa May had requested an extension up until June 30th but EU leaders granted one until May 22nd if the framework for future cooperation, known as the Withdrawal Agreement or 'the deal', is approved by the House of Commons next week.

According to Reuters news agency Emmanuel Macron told fellow EU leaders that May only has a five percent chance of winning the vote next week, after hearing the prime minister's speech on Thursday.

Donald Tusk, president of the European Council said Macron was being optimistic.

If British Prime Minister Theresa May cannot find consent for her deal among MPs, she will once again have to take her begging bowl to Brussels to seek a further extension and offer a clear plan to move forward by April 12th.

EU27 responds to UK requests in a positive spirit and:
? agrees to Art. 50 extension until 22 May if Withdrawal Agreement approved next week
? if not agreed next week then extension until 12 April
? approves ‘Strasbourg Agreement’
? continues no-deal preparations

Theresa May' now has to convince some of the 149 MPs who voted against her exit deal just 10 days ago to vote for the same deal.

The brief respite means the UK will not crash out of the EU without a deal on March 29th as previously scheduled – although the specter of a no-deal scenario remains a distinct possibility given the UK parliament's inability to reach a compromise so far.

“The European Council calls for work to be continued on preparedness and contingency at all levels for the consequences of the United Kingdom’s withdrawal, taking into account all possible outcomes,” adds the EU Council's statement.

The length of the extension was the subject of much discussion at the summit, with France and Belgium reportedly pushing for a May 7th Brexit Day, as supposed to May 22nd. The EU Council's decision to cut the period of extension requested by the UK government is designed to prevent the UK from having to hold EU parliamentary elections from May23rd to May 26th.

French President Emmanuel Macron made it clear that this was the last spin of the dice, warning that a no-deal scenario was the only alternative to the Withdrawal Agreement. “We have to be clear on Brexit, to ourselves, to our British friends and to our people. The Withdrawal Agreement cannot be renegotiated. If the UK votes negatively, we'll head towards a no-deal,” tweeted Macron.

PM May will now attempt to get the same deal, which has been vehemently rejected so far by the UK lower house in two votes, approved by parliament next week. Rights activists representing the 1.2 million UK nationals in Europe and the 3.6 EU nationals in the UK are planning a March on Saturday in London.

@BritishinItaly flying in to London for march on Saturday, meeting in Borough Barista 60 Seymour Street from 10.30. Please join us there or 11.30 at Speakers' Corner @YleniaGostoli @AlanFisher

We're signing the petition in drives but there are still plenty of us trying. Keep signing British in Europe. This is one vote they can't take away from us. https://t.co/trLkqvjbk1