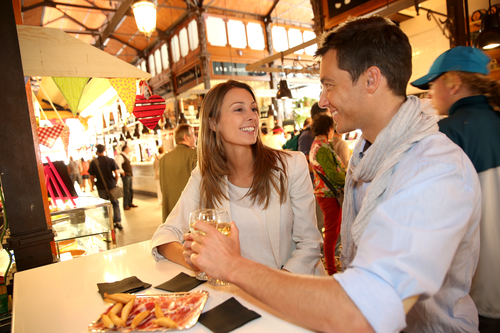 The question should be 'Why do I want to learn Spanish?' Finding your motivation to learn Spanish is so important. You need a compelling reason. For me, for many years I had a longing to come and live, work and settle down in Spain. So for me learning Spanish wasn't a chore. Unlike the maths and physics I was forced to learn at school as a teenager. Find your motivation and the rest will fall into place! Learning a language as an adult is a life-long process. We live in a fast-paced world with more and more emphasis on instant gratification. 'I want to be able to speak Spanish fluently now and I'm not prepared to invest hours, months, years in the process.' This is a fallacy. Of course, what makes us feel more frustrated as language learners is being surrounded my books telling us, 'Spanish in 15 seconds' or YouTubers boasting, 'how I became fluent in six languages in six months. Yeah, right.

You can't learn a language to a high level overnight. You feel like things are going slowly. That's fine. Don't beat yourself up about it! Did you pop out of the womb speaking your native language fluently? No. Don't pose yourself 'huge' questions like, 'how can I perfect my Spanish?'. Don't make the mistake of setting yourself gigantic goals which become insurmountable. Instead make yourself a list of small achievable goals. Yes, be ambitious but be selective in your language learning. Adopt a filtering process and prioritise the pieces of language you really need to learn at your particular level of Spanish.

4. Mimic the accent and be confident!

What's the point in perfecting Spanish grammar and having a really rich vocabulary if when you speak Spaniards struggle to understand you or flinch at your 'accentazo'? If your not saying things that are easily understandable, then it doesn't really matter how well you know the imperfect subjunctive. I've found over the years that by mimicking the Spanish accent generally native speakers tend to be far more receptive to me and take me more seriously even if I make small mistakes.

Lot's of people have a phobia of speaking with a Spanish accent. Seriously, get over this phobia and speak with confidence and you'll sound more convincing. Think about the times when you've had a conversation with someone who is speaking English perfectly but with a really, really thick accent, whether it be Spanish, French, regional English, Scottish or Jamaican. You probably had to concentrate on what they were saying twice as much. This is how you sound to Spaniards if you're not adopting that Spanish. Go to Spain and actually speak to native Spanish speakers. Watch Spanish TV, listen to Spanish radio and music and read in Spanish. Resist the temptation to fall back on your favourite TV shows from back home. If you're already living in Spain

People say you can learn a language by 'osmosis', that by simply being Spain you will instantly improve your level. Not really true. Some things you will pick up passively. But you will need to actually interact with people and this means talking to them. It's really important to get as much exposure as possible to Spanish. Some people do manage to live in Spain for long periods of time without making much effort to interact in Spanish. For me the language is intrinsic to the whole experience of living in Spain.

And it if it's not practical to spend time in Spain, hunt down Spanish speakers in your home country. There are Spanish exchange evenings or 'intercambios' in most towns and cities around the world. I found this a great way to meet native Spanish speakers, learn 'real' Spanish and make a fantastic network of Spanish friends who have exposed me to 'La España profunda'.

6. Get into a routine

Normally we moan about routines, but to learn Spanish successfully you'll need to make it a habit. Don't do what I did when I first started learning Spanish. Epic weekend-long learning sessions followed by nothing for weeks, sometimes months. Little and often is the key to success. Even dedicating just fifteen minutes a day you'll make progress. Be meticulous in your learning. To learn Spanish successfully, instead of seeing the process as one of learning, treat it like research. You're researching the language continuously. Be open and inquisitive all the time. Create mini weekly learning routines, vocabulary lists, new verbs, expressions.

Regularly use media to help you learn. Content is king!  Expose yourself to Spanish TV, radio, music and websites all the time.

Don't fall into the 'I can just get by with what I already know' trap. It's easy to get comfortable with the level you have, maybe it's good enough to survive so why bother learning any more? What you're really saying is, I'm happy to just keep making the same mistakes. I was guilty of this. However, it's important to acknowledge that language learning is not always an upward trajectory. You go through peaks and troughs and periods where you just plateau. Find new ways to stay motivated and keep moving forward with your Spanish. What's the point in doing something in a half-hearted way? The longer you pause your learning the harder it's going to be to start again. You've come this far, so keep taking it to the next level and don't fossilise.

Yep, there's no way to avoid it i'm afraid. You can't learn Spanish successfully without learning the grammar. It's really a case of just hitting the books and studying. It's quite a mechanical process. If that sounds like language learning hell then luckily there are lots of resources available online such as YouTube tutorials, grammar games and practice tests. Personally, I realised that at an advanced level I needed to take classes to help guide me through the grammar. There are times when you just need a teacher to explain something to you face to face, especially the dreaded subjunctive.

When in Spain’s latest podcast episode: How to learn Spanish successfully – My journey to fluency and a trip to The Royal Spanish Academy, the mother ship of the Spanish language ? ?Listen here?? https://t.co/EYWgFw2VaO #learnspanish #speakspanish #Spanish pic.twitter.com/v6bt13chsj

Paul Burge is a former BBC journalist who moved from Oxford, UK to Madrid in 2013 where he now hosts the highly entertaining When in Spain a weekly podcast show about life in Madrid and beyond. He works as a freelance journalist and English teacher.  Follow Paul's observations and advice about living in Spain on Facebook, Instagram, Twitter and his new YouTube channel.

READ ALSO: Nine Spanish culture shocks that I still can't get my head around