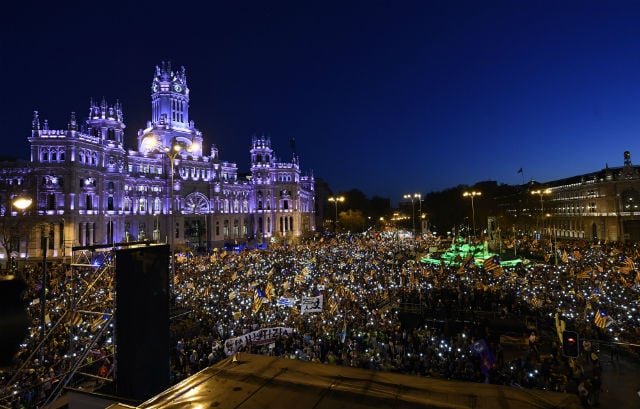 An estimated 18,000 people marched through Madrid's city centre. Photo: Oscar del Pozo
Police estimated that some 18,000 people marched through the city centre, the first such demonstration by Catalan separatists in Madrid since 2012.
Many of the protesters carried the red-and-yellow striped flag of Catalonia, and a banner at the front of the march read: “Self-determination is not a crime”.
READ ALSO:
The separatists denounce the court case mounted against the regional politicians as a politically motivated show trial.
Nine of the 12 on trial at Madrid's Supreme Court face up to 25 years in jail on charges of rebellion and other offences for pushing a secession bid referendum in October 2017 in defiance of a court ban, and for a brief declaration of independence.
The moves sparked Spain's deepest political crisis since the transition to democracy in the 1970s after the death of dictator Francisco Franco.