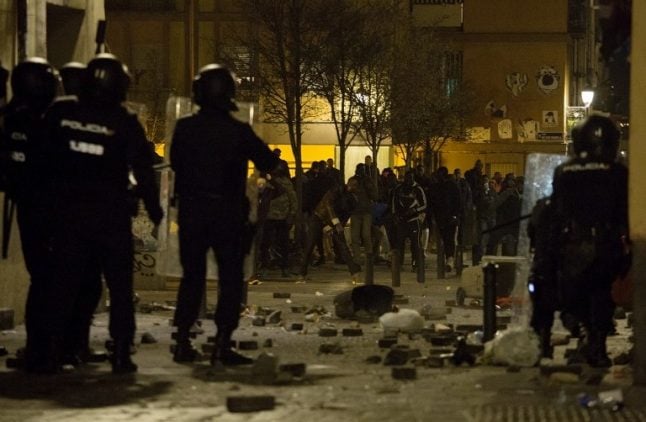 Riots broke out in Lavapiés on the night of March 15th 2018. Photo: Olmo Calvo / AFP

I’m getting used to the sound of hovering helicopters but what can I expect, living in Lavapiés? I live in a barrio so routinely pushed to the edge that, every now and then, the pressure becomes too much and its people crack.

We followed the sound of hovering helicopters until we hit an advancing police front line moving down Calle Mesón de Paredes. The troubles were on the other side of the flashing blue lights, just 50 metres away, and the debris was hot beneath our feet as we stepped over burning motorbikes, melted bins, bricks and shards of glass. The streets smelled of burning rubber and looked like a war zone.

THE DEATH OF MAME MBAYE

Hours earlier, Senegalese migrant Mame Mbaye suffered a fatal cardiac arrest. The police said they found him lying outside his home and tried to resuscitate him, but his friends claim the officers had chased him down, causing him to suffer a heart attack – this was the version that sparked off the riots.

Scores of migrants quickly gathered and created a human blockade on either side of Calle del Oso, preventing the police from taking the body of Mame Mbaye away. His friends and comrades wanted answers before the scene of the crime was dismantled and swept away forever.

Prolific humanitarian photographer Olmo Calvo grabbed his camera and made a beeline for the riots. His photographs would go on to provide a first-hand account of what happened that night. There was a surge in the crowd, and suddenly paint and eggs started flying. It was total chaos. People were really angry.

The advancing front line of police engulfed a bystander clinging to a lamppost in fear, who was beaten unconscious by a policeman. The man was hospitalised and has recovered, but eyewitness accounts and video recordings are shocking.

Mame Mbaye had arrived in Madrid in 2004, and was just 35 when his pre-existing heart condition finally killed him. He had never been treated because he had never visited a doctor here. He couldn’t because he wasn’t “legal”. After 14 years living and working in Madrid, he was still sin papeles (undocumented). How could that be?

Mame wasn’t alone in fearing the authorities. During his life in Madrid, he kept a low profile – something many migrants do after entering the country illegally by boat or by jumping the fences into border cities Melilla and Ceuta. There’s a community-wide fear that even if you’re supposedly allowed to claim residency here, you might be denied it; and then you’re in the hands of the authorities, who don’t always treat people fairly.

This ongoing tension between Madrid’s “illegal” migrants and the Spanish authorities had been bubbling away for years, and it’s undeniable that Mame Mbaye’s death was linked.

THE PEACEFUL PROTEST THE NEXT DAY

This is the fastest I’ve ever seen a protest pull together. Within less than 24 hours, thousands had gathered on Plaza de Nelson Mandela and the surrounding streets. The uniformed police had retreated, aware that their presence was raising tensions.

¡Ningún ser humano / es ilegal! (No human being is illegal!)

…the crowd chanted, drowning out the menacing drone of helicopters hovering above. And, just around the corner, burning candles, hand-written messages and fresh flowers lay around the doorway of Mame’s former home, in the place where he passed away. This week, the conservative People’s Party (PP) proposed a policy that would temporarily spare pregnant undocumented migrants in Spain from deportation if they agreed to give up their child for adoption once it was born.

Newly childless, if these mothers were picked up in a raid, or were citizens of countries with which the government has repatriation agreements, they would be sent back to their country of origin. But their adopted children would remain in Spain, presumably either in an orphanage or with their adoptive parents. With policy proposals such as this, it’s hard to see any kind of governmental improvement in migrant rights.

In the private rented sector too, investors are still being allowed to run wild and force evictions, adding another dimension to the daily nightmare that migrants face in Madrid.

Time Out’s article about the world’s coolest neighbourhoods – in which Lavapiés was named number one – has hugely benefited property speculators by increasing the attractiveness of, and therefore prices in, the neighbourhoods they’re currently invading. The picture above shows an eviction that took place on Calle Argumosa 11, on one of the “coolest streets in the world”.

What has changed, however, is the voice of the people who are suffering. Mame Mbaye was a mantero (“blanket man”), named after the white blankets filled with counterfeit merchandise, and manteros are speaking out louder than ever before.

Associations of manteros are raising awareness of the difficulties they face, through campaigns, protests and by creating their own fashion label called Top Manta – an ironic middle-finger to the authorities that are constantly chasing them down and confiscating their goods. Where further change lies is also in the country’s awareness of their struggles. A year may have passed since Lavapiés made global news, but the pressure that caused the riots never went away. Walk through the streets of Lavapiés and you can still feel the tension, as can the police, who keep a constant presence.

Until there is real improvement in migrants’ rights, this neighbourhood shrouded in street art, pockmarked with trendy cafes and invaded by investors is going to remain on the edge, until one day the people will inevitably crack again.

There will be a demonstration this evening (March 15th) at 6 pm on Plaza de Nelson Mandela in memory of Mame Mbaye. Will the helicopters be hovering? We’ll just have to wait and see. 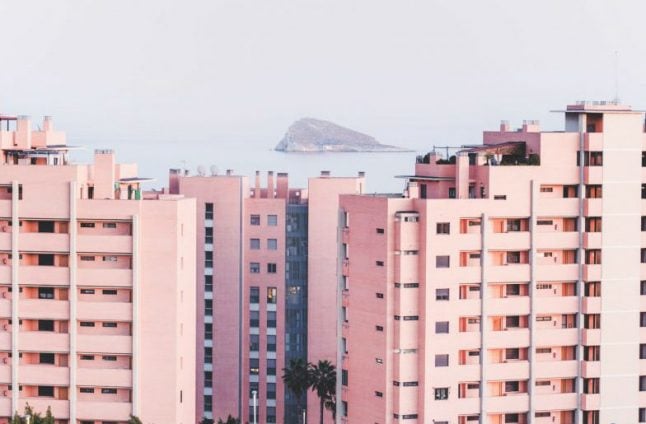 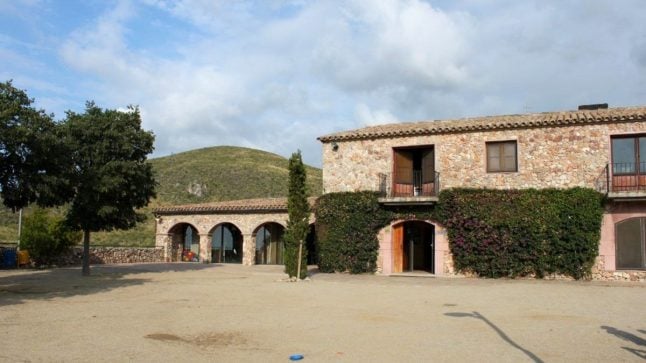