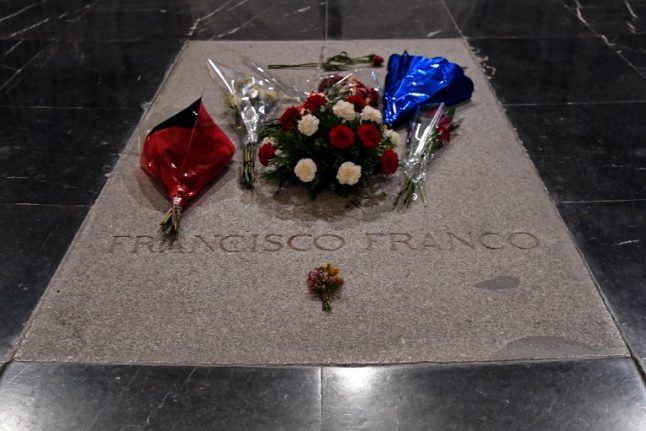 “The reburial of Franco's remains will take place in the morning of June 10th. They will be taken to the state pantheon Mingorrubio-El Pardo,” Deputy Prime Minister Carmen Calvo said following the cabinet meeting on Friday. A man wearing a Franco-era Spanish flag among visitors at the Valley of the Fallen. Photo: AFP

The Socialist government of Pedro Sanchez made it a priority to remove Franco's remains from an imposing basilica in the Valle de los Caidos (Valley of the Fallen) near Madrid, which was built in part by political prisoners during his regime.

But despite pledging the move just days after taking power last June, the bid to exhume the remains of Franco, who ruled from 1939 to 1975, has run into difficulties and with a general election in April, time was running out.

Franco's family, which is against the exhumation said it would only agree to bury his remains at Madrid's central Almudena Cathedral, where the family owns a crypt and where the dictator's daughter, Carmen Franco-Polo and her husband are already interred.

But government in a bid avoid such a high profile resting place, wanted Franco's embalmed body to be relocated to a more discreet spot and insisted that the cathedral in the centre of Madrid was out of the question. Fresh flowers on Franco's grave in the Valley of the Fallen. Photo: AFP

Instead the government has suggested that a grave in the Mingorubbio cemetery in El Pardo, a town on the edge of Madrid where the Franco family had a palace, would be ideal. The  Mingorubbia cemetery has been suggested for reburial.

But there are still fears that any new burial site will become a place of pilgrimage for admirers of Franco and supporters of fascism.

Last year alone, 366,000 people visited the Valley of the Fallen, according to ticket sales at the site – 150,000 of them in the July and August after the newly installed Spanish government announced plans to exhume him.

The National Francisco Franco Foundation, which defends the memory of the dictator, has said it will appeal the move at the Supreme Court.

“When you attack Franco, you attack my family, over half of Spain, the monarchy and the Church which protected him,” Franco's great-grandson Luis Alfonso de Borbon said in an interview published in conservative daily newspaper La Razon in October.

READ MORE: Spanish councils ordered to remove Franco symbols once and for all