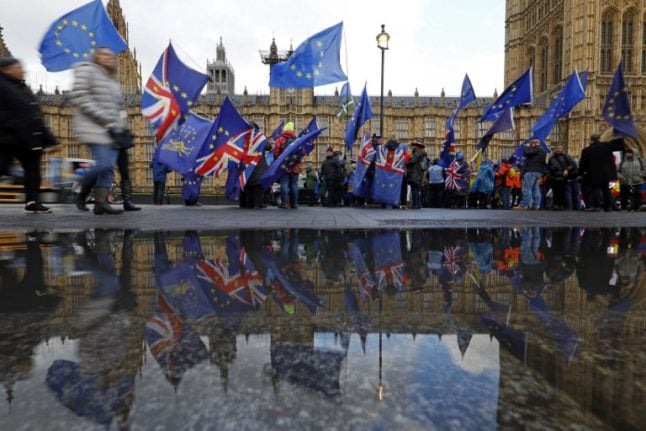 Britain's Prime Minister Theresa May speaking to the house after losing the second meaningful vote on the government's Brexit deal, in the House of Commons in London on March 12, 2019. Photo: AFP/PRU.

A majority of 149 MPs rejected the terms of the withdrawal agreement she had negotiated with Brussels.

A subsequent vote on whether the UK should leave the EU without a deal is now scheduled for Wednesday March 13th. If MPs take a no-deal off the table, another vote on an extension to Article 50 will be held on Thursday March 14th.

After the vote citizens rights activists were left feeling more insecure about their futures than ever.

“Tonight we've taken a step even further into uncertainty on our rights. Everyone needs to remember that a vote tomorrow against a no deal doesn't actually stop a no deal exit – only an approved withdrawal agreement or revocation of Article 50 can do that,” Kalba Meadows, coordinator of rights advocacy group Remain in France Together, (RIFT) told The Local.

“So more than ever we need the European Council to ring fence our rights – the risks are very high. And an extension doesn't remove those risks – the same choices between deal, no deal and revocation still exist, whenever a new Article 50 date is. The 5 million Brits in the EU and EU citizens in the UK have spent nearly 3 years in limbo, and we're suffering. Only ring-fencing can give us the security we need right now,” adds Meadows.

Jane Golding chair of British in Europe echoed the call to immediately ring-fence the rights of Britons in the EU.

“This vote result is no surprise. But there are only 17 days to go until 29 March and people still don’t know what their status will be, whether they will be able to travel and re-enter the countries where they live, what will happen if they are applying for jobs, or to their pension contributions and healthcare if they are pensioners,” she told The Local.

“No deal is a disaster which is why once again we call on the EU and the UK to ringfence the citizens' rights part of the withdrawal agreement now, before it's too late to take real people's lives' off the negotiating table’.  It’s about our fundamental rights and the promises that were made to us,” she said.

We very much hope that no-deal preparations at last include ring-fencing our rights along with those of @the3million. We do not deserve to be collateral damage after so long in limbo. https://t.co/isZapaFGAF

European political and business leaders reacted with dismay and disappointment to the vote.

The French president said he “regretted” the vote by the British parliament.

“The solution to this impasse can only be found in London,” read a statement from the Elysée.

“The decision of the British House of Commons is a bitter disappointment from an economic point of view. The danger of unregulated withdrawal from the EU and the associated economic and legal uncertainty continues to hover over the economy. In addition to significant new Brexit bureaucracy, the demolition of supply chains and a breakdown of “just-in-time” productions in the UK are threatening,” Eric Schweitzer, president of the German Chambers of Commerce and Industry, said in a statement.

In addition, more than 10 million customs declarations and several billion euros in customs duties would be due annually for German companies. The companies still have no planning certainty in the UK business. Therefore, companies should prepare now at the latest on the basis of the DIHK Brexit checklist. Unfortunately, the Gordian Brexit node remains unresolved,” added Schweitzer.

“The EU has done everything it can to help get the Withdrawal Agreement over the line. The impasse can only be solved in the #UK. Our “no-deal” preparations are now more important than ever before,” tweeted the EU's chief negotiator, Michel Barnier.

The EU has done everything it can to help get the Withdrawal Agreement over the line. The impasse can only be solved in the #UK. Our “no-deal” preparations are now more important than ever before.

His thoughts we echoed by MPs and leaders in Spain, France, Sweden and Germany.

It now remains to be seen if the UK parliament will opt for an extension to Article 50 and if the EU would even grant one. The next EU Council summit on March 21st-22nd could be when we find out.