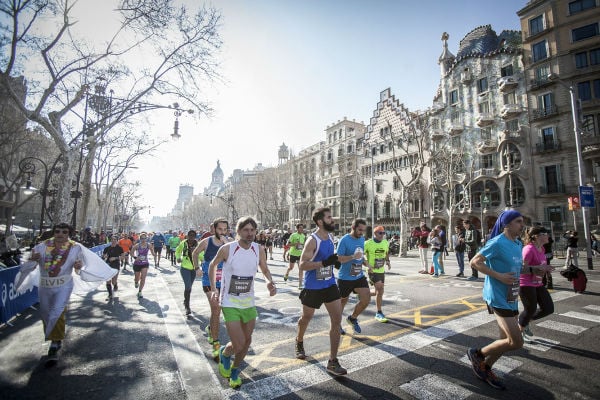 If you have the running bug then check out the huge number of running events taking place in Spain during 2019.

Combine a marathon with a holiday, or just use it as an opportunity to discover a new part of Spain.

Here are ten best and (most probably) sun-soaked running events in Spain, plus a bonus fun run. And they all still have places to register. The Barcelona Marathon is considered one of the most attractive in Europe. The favourable climate combined with a fully urban circuit that passes through the main landmarks make it hugely popular for runners.


As well as the full marathon, there is a free 4km “Breakfast Run” on the Saturday morning which recreates the last kilometres of the 92 Barcelona Olympic Games marathon, starting from the Monjuic Mountain and ending at the Olympic Stadium. Followed by breakfast for all the runners. The Ibiza Marathon is a relative newcomer to the international running event circuit with the inaugural race launching in 2017.

This year, over 3000 runners are expected to participate in the race which starts on the seafront promenade of Ibiza Port overlooking the Marina and the Dalt Vila castle, before heading inland and reaching the finish line on the east coast at Santa Eularia des Riu.

The race includes several parallel activities including the 42km relay and a 12km route on the same day.

A great way to relax on the Sunday after the marathon is to head to Benirrás Beach in the north of the island with its relaxed hippy vibe and unmissable drumming session every Sunday evening. Madrid's famous marathon has been brought forward by a day to avoid clashing with the general election on Sunday April 28th.

For over 20 years, the Rock ‘n’ Roll Madrid Marathon has made running fun by infusing each stage with live bands, cheer teams and more.

10k and half marathon routes also take place on the same date.

The Sherry Marathon is a running event with a twist. Now in its third year, it is a unique opportunity to run through the impressive Jerez countryside – a landscape of gentle slopes and infinite vineyards soaked by the warm 20°s Andalusian sun – on a chalky trail and uneven terrain.  You can even enjoy the fruits of the land along the run with sherry available to sample at the watering stops along the route!  Perfect for runners with a drinking problem or drinkers with a running problem.

14k and half marathon routes also available on the same date.

NB:  This marathon has also been brought forward by a day to avoid clashing with Spain's general election on Sunday April 28th.

The Palma Marathon is set in the unique scenery of the beautiful city of Palma. Participants enjoy a course along the breath-taking promenade with views over the bay and the turquoise blue Mediterranean Sea, towards the cathedral with its stunning stained-glass round window, and into the historic old town.

The Bilbao Night Marathon is a truly magical event which starts at dusk, taking in the architectural sights of the industrial city culminating at the iconic Guggenheim Museum, lit up against the inky night sky. The Fuerteventura Dunes Half Marathon is the only half marathon race in Europe with almost its entire course run on sand dunes.

The 21km route is not a particularly difficult one, running through the Natural Park of the Dunes of Corralejo but the 25°C heat and the varied running surfaces from stony to soft white sand, undulating dunes and more compacted hard sand along the route are just some of the adverse conditions the Fuerteventura marathon runners will have to overcome.

Check out Spain-Holiday.com for great deals on accommodation in Fuerteventura.

Registration is open until 30 October HERE

The mainly flat route of the Valencia Marathon and the mild December temperatures create optimum running conditions especially for novice marathon runners, although it is popular with runners of all abilities.  The marathon starts and finishes in the spectacular City of Arts and Sciences, with the final leg of the route taking runners along a footbridge traversing the outside pools; a backdrop which will surely encourage tired legs to dig deep in the energy reserve for the final stretch.

Find great deals for your city break in Valencia, the third most popular city in Spain, and enjoy all it has to offer from architecture to gastronomy and nightlife, with this Guide to 24 hours in Valencia.

With an average temperature of 19ºC, the Lanzarote International Marathon takes place in December along a coastal avenue in the Island of Lanzarote, covering the municipalities of Costa Teguise, Arrecife, San Barlotomé and Puerto del Carmen.

Lanzarote, located in the Canary Islands off the coast of Africa is a great winter destination for an active holiday with great hiking routes to explore and other outdoor sports. Considered to be one of the best marathons in Spain, the Malaga marathon route is relatively flat and passes the main historic and architectural features of the city including the port, promenade and old town.

Half marathon route also available on the same date.

Find some great deals in Malaga city and enjoy the sunshine city of the Costa del Sol with this handy 24-hour guide to Malaga city.

There is nothing “fun” about this Benidorm Vertical Run! It might only cover a distance of 180 metres, but your legs will turn to jelly as you tackle 52 floors and a total of 924 steps vertically running up the Gran Hotel Bali in Benidorm.

If the year-round vibrant nightlife of Benidorm seems too much to handle after your exertions, why not just flop on one of the many great sandy beaches that Benidorm has to offer and take a well-earned break in the sun.