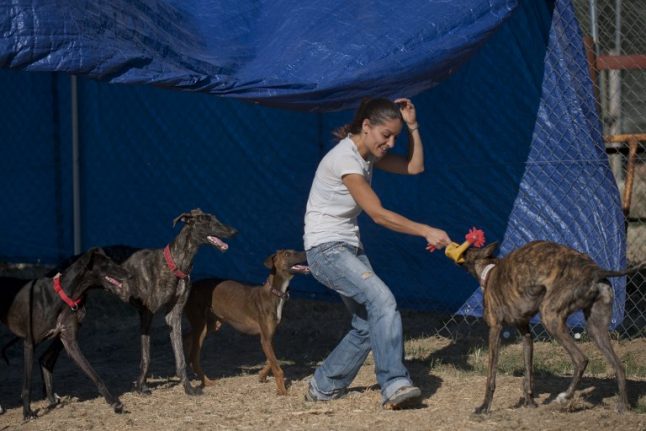 Some owners train their greyhounds to hunt by tying them to their cars with a long rope and then driving at 60 kilometres (40 miles) an hour, said Eduardo Aranyo of Spanish animal protection party PACMA.

“There are animals that end up destroyed, literally dragged by the car,” he told AFP.

Spain is one of only a handful of European countries that allow hunting with the aid of greyhounds, which trap, kill and pick up the prey. France, for example, banned hunting with greyhounds in 1844.

“The domestic dog, that we have at home, is an object of affection, that you love and care for. But for hunters, dogs are often just another tool for the hunt,” said a spokesman for the Civil Guard's nature protection service Seprona.

Spanish law is also soft in this area. Tying a greyhound to a car is an administrative not a criminal offence and is only a crime if it causes serious injury or death, he added.

Animal lovers are calling for a ban on hunting with greyhounds. A Change.org  petition is calling for the European Parliament to outlaw the practice.

Hunters own many greyhounds, or “galgos” as they are called in Spanish, and this sometimes leads them to place little value on their lives, said Teresa Regojo of the Galgos en Familia rescue group which runs a greyhound shelter in Malaga in southwestern Spain.

“Hunters have at least ten. They make them reproduce without any control to have a champion greyhound,” she said as she was surrounded by about two dozen greyhounds at the shelter.

When the hunting season — which runs from November to February — ends, many hunters simply abandon their greyhounds.

Campaigners such as SOS Galgos and Galgos del Sur estimate that 150,000 animals are abandoned in Spain each year, one-third of them greyhounds.

Some greyhounds are drowned by their owners or hung.

“There are less hangings but now they drown them by throwing them in wells because this is not seen, or they break their legs so they can't return home,” said the founder of Galgos en Familia, Vera Thorennar.

The retired Dutchwoman arranges to have the abandoned greyhounds which her refuge picks up adopted by families in other European nations or in the United States.

Hundreds of abandoned greyhounds end up in municipal kennels, where many are euthanized.

In a sign of shifting attitudes, in recent years courts have issued jail sentences for abuse of greyhounds.

A greyhound breeder and president of an association of hunters was sentenced in October 2013 in Toledo in central Spain to seven months in jail for hanging two dogs.

“There are more young people who work to save (greyhounds) and that is a good sign,” said Thorenaar.