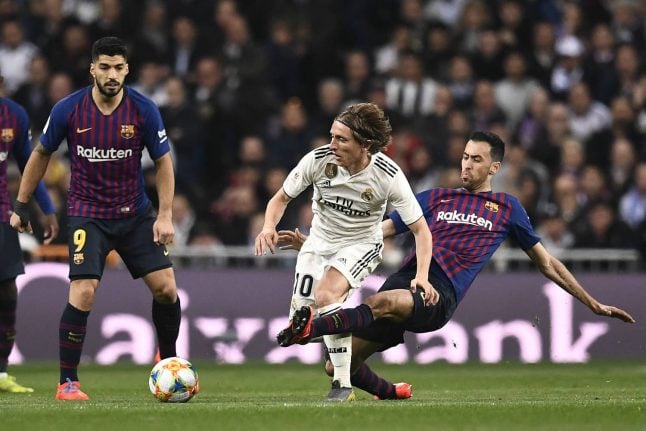 Barca's 3-0 victory knocked Real Madrid out of the Copa del Rey on Wednesday. On Saturday, Barcelona have the chance to effectively eliminate their great rivals from title race too.

This week's Clasico double-header is not just being played out on the pitch but in clicks.

Real say their videos routinely reach more than 100 million views in the 10 days around a Clasico, more than the Superbowl in January, which hit 98 million.

Spain is not the dominant country, with the United States just as engaged with Real, narrowly ahead of Mexico, Colombia, Peru, Brazil, France, Algeria and India.

“For clubs like Barca and Madrid, maybe only 1 per cent of their fanbase will come to watch them play,” says Joe Weston, director at We Are Social Sport, who crafted the online announcement of Paul Pogba's transfer to Manchester United, by pairing him with the rapper Stormzy.

“How do you serve the other 99 per cent all around the world, who are just as passionate? Social media means you can touch those fans in real time.”

For Real Madrid and Barcelona, the battle to be most followed is fierce.

In August 2017, Madrid basked in the glory of becoming the “first sporting institution in the world to eclipse 100 million followers on Facebook.”

“It means the club stands out from our nearest rivals like Barcelona, the NBA and Manchester United,” Madrid's statement read, adding: “Data also shows a 50 per cent difference over Barcelona for engagement.”

Real Madrid had chased long and hard, with former stars like David Beckham and Kaka asked to make appearances to give numbers an extra push.

Data can reveal characteristics about followers, from the most basic such as gender and location to the more detailed, including interests and times when they are most receptive.

Barcelona know a high proportion of their following is male, young and Brazilian, so it easy to see why Philippe Coutinho led the club's Pro Evolution Soccer advert on Twitter on Thursday, at midday in Spain, but the start of the schoolday in Rio de Janeiro.

Innovative use of social media has allowed some aspiring clubs, such as Roma, Bayer Leverkusen and Borussia Dortmund, to stand out.

“We do it with a sense of humour, we don't take ourselves too seriously,” says Jochen Rotthaus, Bayer Leverkusen's marketing and communications director.

“It's nice when fans can have a conversation with the club and not feel like they're talking to a robot.”

Players hire agencies to manage their social media and select a handful of buzzwords to define their image. One grouping might be: leadership, dedication, the United States, family and dogs.

“Some players want to change their image,” said Josh Hershman, managing director at Ten Toes Media, who work on the social media accounts of some of the world's biggest sports stars.

“Others just want to grow their following or get enough of a presence for commercial reasons, but the smarter ones understand the value of social media. They realise it's a chance to promote themselves in a positive way.”