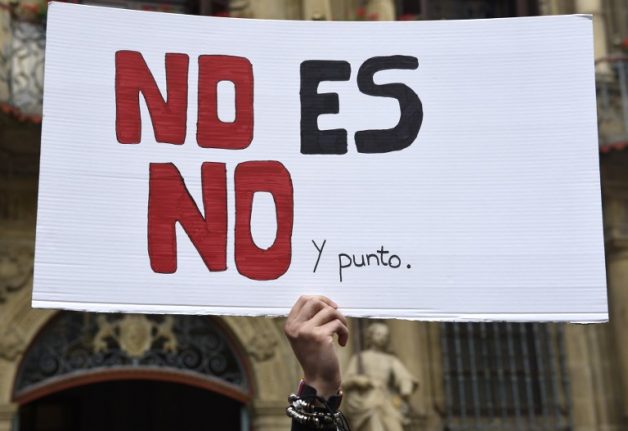 A demonstrator holds a sign reading "No means no" in Pamplona on May 10, 2018 during a protest against the acquittal of five men accused of gang raping an 18-year-old woman.

In March 2015, a 29-year-old man — identified by the court with his first name Ricardo — took the victim, then aged 18, to his flat in Collado-Villalba near Madrid with two other men.

Ricardo, who had previously had “some type of sexual relationship” with the victim, forced her to give him a blow job.

She was then forced to do the same to his two friends, all of whom “knew she didn't want to”.

The court, which said the victim suffered from anxiety and depression after the event, sentenced Ricardo and another man, Martin, to 15 years in jail, and the other friend Miguel Angel to 14 years.

The case is reminiscent of the 2016 “Wolf pack” case that saw five men accused of gang-raping a teenager at Pamplona's famed bull-running festival.

They videoed it on their smartphones and bragged about it within their WhatsApp group, calling themselves “The Pack”.

Last year, they were convicted of sexually abusing, rather than raping the victim, and sentenced to nine years in jail, causing outrage.

The decision sparked massive demonstrations in what became Spain's equivalent of the #MeToo campaign, with victims lambasting a “patriarchal” judiciary derided as too tolerant of widespread sexual violence.

OPINION Fighting the 'Wolf Pack': What next for Spanish women?