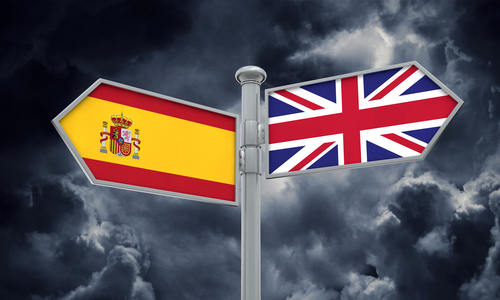 These questions have been on the mind of many of the more than 300,000 Brits resident in Spain and have come up repeatedly at the Q&A sessions held by British Embassy and Consulate officials at sessions across Spain.

The British Ambassador, Simon Manley, and his team have sought to reassure British residents that as long as they have officially registered and are here legally when Brexit happens, then the Spanish have said they will do everything possible to protect the existing rights of British residents living in Spain.

At a meeting in Madrid last week, Manley assured a packed out room at the Bellas Artes building that the Spanish government were preparing a new law (decreto ley) outlining contingency plans for British residents in the wake of a No-Deal Brexit and that it should be in place before parliament is dissolved on March 5th ahead of the general election.

While insisting that it was entirely up to Spain to decide how to treat British nationals in future, the British Ambassador said that the intent to make it easy for Brits to stay had been expressed at all levels of bilateral meetings.

We won’t know for sure what the measures will be until the decreto ley is officially published, but members of EuroCitizens, a Madrid-based lobby group fighting for citizens’ rights post Brexit, got a heads up during a meeting with civil servants from the Foreign Ministry, Interior Ministry and President’s office earlier this month.

Of course, everything approved in the decreto ley will be on the condition of reciprocity with the UK and the guarantee of the same treatment of Spanish citizens resident in Britain.

These are the key points to be included in the new law:

Registering as a third-county national

In the event of a hard Brexit, UK residents will have to register in Spain as third-country nationals.

Spain guarantees that there a “sufficient”  transition period will be given (although this is undefined as yet and will depend on the effective date on which the UK leaves the EU).

From March 30th your existing EU documents (Your registration certificate or residence card as a family member of EU citizen) will continue to be valid until the end of the grace period – even though you are no longer officially an EU citizen.

During the as yet undefined “grace period” Brits will have to apply for a new third-country ID, a Tarjeta de Identificación de Extranjeros (TIE).

But the Spanish authorities promise that the procedure for granting this new status will be “practically automatic” for British citizens who are legally resident in Spain.

Members of EuroCitizens were assured that extra resources would be allotted to immigration staff at oficinas de extranjería and comisariasin those provinces with large British populations.

Provisions for non-registered Brits resident in Spain before Brexit

If you and all your family members are not yet registered, for example, if you have recently arrived in Spain, then you should immediately apply at a foreigner’s office (oficina de extranjería) or police station (comisaría) for an EU citizen's resident document – your application will be considered under the same conditions as current legal UK residents.

If you have been unable to formally submit your application or have not been given an appointment before the withdrawal date – as in if the earliest cita previa (appointment) is not until after March 29th, there will be a specific process for applying for the new third-country ID during the period of grace, as long as you can prove that you were residing in Spain before the Brexit deadline.

However, the requirements stipulated by the new law, (that enables no-deal Brexit measures in Spain), will be similar to those for an EU citizen. Your application will be processed through a specific process which will be less demanding than the general residence process for all other third-country nationals.

Applications for people arriving after March 29th will be processed in the same way as those for all other third-country nationals, with the corresponding requirements which are considerably more demanding than those for EU citizens, especially for non-working people.

It is also important to point out that, if the UK leaves the EU with no agreement, British citizens who are not registered as residents will, like all other third-country nationals, only be allowed to spend 90 days in any one six-month period and that their exit and entry will be controlled at ports and airports to enforce this.

Your new ID card (TIE) will be biometric and will be valid throughout Spain and for travel within the EU-27 along with a passport. The document will accredit your status as legally-resident third-country nationals (under the régimen general de extranjeros as opposed to our current situation under the régimen de ciudadanos de la UE). If you have more than five years of legal residence, you will be able to get long-term residence (residencia de larga duración). If you have less than five years legal residence, you will be able to apply, under the same conditions, for long-term residence after Brexit once you have completed five years residence.

Working in Spain after Brexit

On March 30th, automatic coordination of social security between the UK and the EU will come to an end. Thus there will have to be a new bilateral agreement covering this area between Spain and the UK or between de the EU and the UK. This would enable existing social security rights and aggregated pensions to be recognised for Spaniards in the UK and Britons in Spain.

The existing S1 scheme and EHIC card will also stop automatically in the event of a hard Brexit. A new agreement between Spain and the UK will have to be reached which reflects the true costs of the healthcare for the roughly 77,000 British UK pensioners in Spain compared with the mere hundreds of Spanish pensioners in Britain (to maintain access to public health for UK nationals as now).

The Eurocitizens group welcomed the provisions and said it should bring peace of mind to the many Brits worried about their future.

“One of the most difficult things to deal with for UK residents since the Brexit vote has been the lack of certainty about our futures. Now at least we know that, despite a Brexit cliff-edge, in Spain there will be a lengthy transition period and potentially simple administrative procedures to enable us to bridge the sad transition from European citizens to third-country nationals,” Eurocitizens said in a statement.

“We would like to thank again the civil servants who met us on 6 February, worked with us on this document and indeed who have engaged fully with us since the triggering of Article 50 nearly two years ago”.