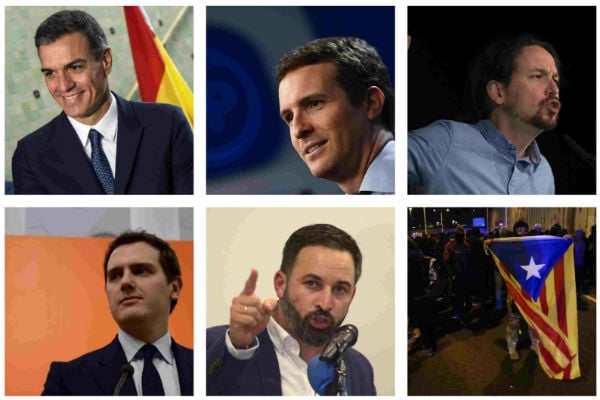 What is this general election really going to be about? 350 seats in Congress, every party wants to win, every party leader would like to be Prime Minister, but the polls are split five ways (six if we include the regional nationalists).

The first ones over the weekend suggest Podemos and Ciudadanos are both slipping, the PP is holding on, and Vox and the PSOE are trending up. Will Podemos drop as low as 10 percent? Will Vox make it past Ciudadanos into third place?

Either coalitions beckon or Spain will see more of the months of posturing deadlock and entrenched disagreement that was only broken after 12 months and two general elections in 2015-2016 by some good old-fashioned political backstabbing, when the PSOE establishment got rid of Pedro Sánchez as leader (yes he came back, and here we are) and ordered socialist MPs in Congress to vote in favour of Mariano Rajoy.

There are 68 days to go until the ballot but after just the first weekend, spokesmen have rushed straight towards the rhetorical extremes. Mr. Casado and the PP have already said they would like to see the indefinite suspension of home rule in Catalonia, announcing April 28th will be a choice between “the Popular Front or the Popular Party”, whispering “we caught them negotiating with Torra”, in reference to the outgoing government's failed attempts to talk to Catalan separatists.

During a softball TV interview on Monday evening—he was even allowed to waffle about his new book—the Prime Minister, Pedro Sánchez (PSOE), criticised those who were just “pouring petrol” onto the Catalan issue. “There are political parties that live off territorial grievances and who want the permanent suspension of home rule”. He added he hoped there would not be much confrontation or many personal insults during the election campaign. Fat chance.

Polling company Metroscopia has revealed Ciudadanos is losing an estimated 400,000 votes not to the PSOE, which Mr. Rivera might prefer given his attempt to position his party somewhere in the middle of the political spectrum, but to Vox, the new right-wing nationalist populist kid on the block, that since the elections in Andalusia Mr. Rivera has tried very hard to avoid mentioning or being seen anywhere near.

Ciudadanos has now announced it will not do any kind of a deal “with the PSOE and Pedro Sánchez”, adding a second cordon sanitaire to the existing one it has against Vox, and that the socialists must be sent into opposition “after their deals with the separatists”. In that they agree with Mr. Casado and the PP, who are also fishing for strategic votes in the Senate, Spain's 266-seat upper house, because that chamber gets to approve or block the suspension of home rule in Catalonia.

Over in Vox, they're not having any of it. Mr. Ortega Smith said during a TV debate on Monday morning that voters shouldn't plunge for the “cowardly right”, in reference to the PP, which would be “wasting a vote”. Mr. Abascal is already opening the champagne to celebrate winning “elections that haven't even been held yet”, after apparently getting the other parties to work “in the service of the nation”.

He is also stoking fears of a new left-wing “Popular Front” and looking to “frighten the enemies of the unity and freedom of Spaniards”, while stopping both “the separatist coup” and “Chavist communism”, in reference to the Venezuela and Podemos. He has announced that Vox will hold a big rally in Catalonia, which should get Mr. Rufián sufficiently excited about apocalyptic horses.

Podemos spokeswoman Irene Montero has said her party represents the useful strategic vote “to stop the reactionaries getting into government” and that she would like to at least be the leading progressive party.

The polls are suggesting that will not happen. Pablo Iglesias failed at his attempt at strategic hegemony on the left last time and will be off on paternity leave until the end of March, after announcing his quickly forgotten “anti-fascist alert” against Vox in December.

On the Basque radical separatist militant left, Arnaldo Otegi (EH Bildu) has suggested a joint Basque/Catalan/Galician/Canary regionalist/nationalist/separatist/leftist block. That might make strategic sense from their point of view, and gobble up some space from Podemos in the process, but there has so far been no response from the other parties.

How much would Mr. Abascal and Mr. Casado love it if Mr. Otegi and Mr. Puigdemont ran in the same coalition? READ MORE ANALYSIS: What the snap election could mean for Spain, Catalonia and Brexit