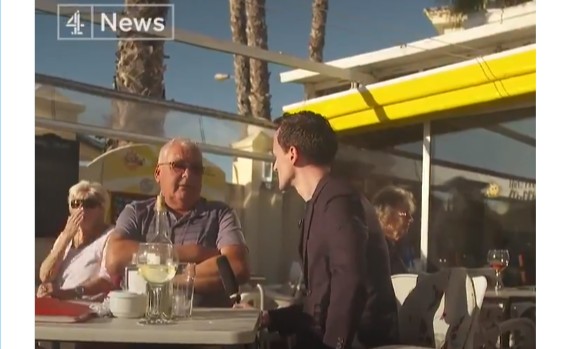 A recent Channel 4 report on Britons in Spain was criticized by campaigners for reinforcing old stereotypes. Photo: Screengrab Channel 4.

Throughout the entire Brexit debacle, a common complaint from Brits living in Spain is that we’re not being seen or heard.

Despite the UK government claiming that citizens’ rights would be its “number one priority” in the Brexit negotiations, we haven’t seen much evidence of this happening.

Citizens’ rights groups have worked tirelessly to protect our interests but have received limited engagement with the UK government. Unsurprisingly, many Brits in Spain feel that they’re invisible, and that their concerns are considered irrelevant.

Until recently, the UK media has taken little interest in our plight. When interest has been shown, we haven’t always been happy with the results.

Whether it’s the terminology used, the locations and candidates chosen for interviews, or the oft-repeated accompanying photographs sourced from media image libraries, most press coverage has reinforced the stereotypes so hated by most.

Let’s start with the “e” word – most of the Brits I know hate to be called “expats”.

READ ALSO: Expats or immigrants in Spain: What's the difference?

The term comes with such negative connotations. It implies that we are different: better than other immigrants (foreign ones, that is!), simply because we’re British and, therefore, superior to everyone else.

Please call us what we are – immigrants, migrants – and don’t differentiate us from EU citizens living in the UK. We’re all in the same boat, although our crew is friendlier and the weather milder here.

Another media depiction I find annoying and inaccurate is that we’re all pensioners living the life of Riley on a ‘costa’, sipping gin and tonic on a sun-kissed beach.

Well, I confess I am a pensioner and I do live on a ‘costa’, so in that respect, I am a stereotype, but I hate gin and haven’t been on a beach in three years!

Only 25 percent of Brits in Spain are of retirement age and many people in this demographic live on low incomes, relying solely on their British state pensions.

Of course, many do live in coastal areas – just as they live inland, in the countryside, and in towns and cities. The younger, working, majority of Brits in Spain are equally geographically dispersed.

As chair of Bremain in Spain, I’m frequently asked by the media to find interview candidates for various articles and broadcasts.

I always encourage journalists to avoid the British enclaves where Spanish is barely uttered, and the most popular meal is a full English breakfast.

Hi @Channel4News, can we have a chat?
We welcome the fact that you have taken the time to visit the EU and speak to some Brits here. There are at least 1.2 million of us who LIVE here full time. EIGHTY PER CENT of us are under retirement age, we run businesses… 1/ https://t.co/q9n1x3yKLv

I beg them not to film at the local bowls, golf or bridge club, and to avoid raiding Getty Images and other image banks for the eponymous shot of a British bar festooned in Union Jacks (invariably the same bar in Benidorm!).

I plead with them to extend their interview remit beyond pensioners and to document the concerns of young families, business owners and students. I suggest they try filming in a big city or, perhaps, venture inland and see a different side of how British people live in this amazingly diverse country.

Sometimes, they listen to my advice and the journalists are empathetic.

However, their editors usually have a set agenda that’s hard to shift. In the end, most journalists book a flying visit and have limited time to spend on their story.

Hence, they want to visit a large, touristy resort with lots of Brits milling about, so they can interview numerous people in the shortest time frame possible, then head back to the nearest airport.

The good news is that British citizens living, working and retiring in Spain are receiving more media coverage in the UK – and in Europe – than at any previous time since the 2016 referendum.

We haven’t escaped the unwelcome terminology or locations, but it’s starting to look like the media is listening to our voices, and sharing them with the public.

Finally, a request to any film crews who are planning to visit Spain: please talk to your boss and explain that the most interesting case histories are obtained by going ‘off-piste’.

If, however, you’re filming in the UK, you could, perhaps, suggest carrying out street interviews in a few Remain-voting constituencies for a change. If you think I’m wound up by being called an “expat”, don’t even get me started about the endless, one-sided interviews with Leavers, in Spain and in the UK…