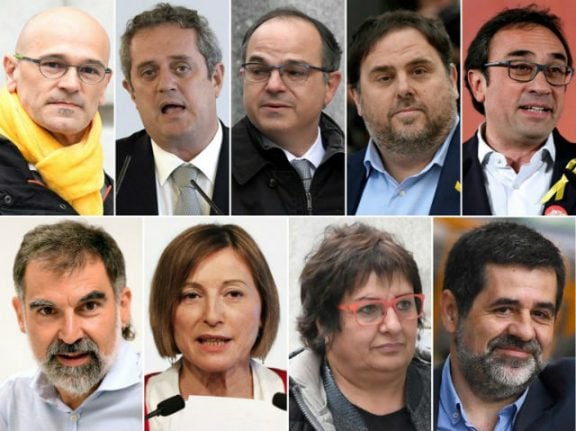 A composite photo of the nine Catalan politicians charged with 'rebellion'. Photo: Gabriel Bouys, Lluis Gene, Pau Barrena/AFP
Expected to last three months, the trial is due to be broadcast live on television from the Supreme Court in Madrid where 600 journalists from 150 domestic and foreign media are accredited.
It is divisive — a “farce” according to independence supporters in Catalonia — but necessary for many Spaniards who looked on in disbelief as the rich region's then executive tried to break from the country in October 2017.
Carles Puigdemont, Catalonia's former president who fled to Belgium days after a short-lived declaration of independence on October 27, is not among the 12 defendants. Spain does not try suspects in absentia for major offences.
The trial's main protagonist is therefore former regional vice president Oriol Junqueras, who opted to remain in Spain. He faces up to 25 years in jail on charges of rebellion and misuse of public funds.
Others in the dock include members of Catalonia's then executive or regional parliament as well as the two leaders of powerful pro-independence associations, ANC and Omnium Cultural.
Nine have been charged with rebellion, with some also accused of misuse of public funds. These have all been in pre-trial detention for months, some of them for more than a year.
The three others are accused of disobedience and misuse of public funds.
Their role in holding a banned independence referendum on October 1, 2017, which was marred by police  violence, and in the subsequent independence declaration will be closely scrutinised.
Conservative former prime minister Mariano Rajoy has even been called to testify.
His government sacked Puigdemont's executive hours after the declaration, dissolved the regional parliament and imposed direct rule on the semi-autonomous region in northeastern Spain.
Controversy over rebellion
Even before the start of the trial, controversy has swirled over the charge of rebellion levelled at Junqueras and eight others. Under Spanish law, rebellion is defined as “rising up in a violent and public manner.”
But the key, divisive question is whether there actually was any violence. The independence movement provided for “the use of all necessary means to reach its aim including… the necessary violence to ensure the sought-for criminal result,” public prosecutors argue in a court document.
The defendants “called on citizens to participate in the October 1 referendum knowing it was illegal and that explosions of violence could therefore take place,” they add.
But supporters of independence deny the accusation of violence. They instead denounce police violence during the referendum, images of which were seen in media round the world.
Legal experts are divided. The Spanish government through its lawyer in the trial is accusing the separatist leaders of the lesser charge of sedition, which fetches up to 12 years in jail.
Far-right takes part
Catalonia's separatist movement hopes to turn the trial into a global political soapbox.
“We will stand before a popular jury — the entire world — which we will have to convince,” said Alex Sola, the lawyer of Omnium Cultural president Jordi Cuixart, one of the defendants.
“It's not pro-independence leaders who are on trial, it's democracy.”
Independence supporters are planning protests in Catalonia, Madrid and in other parts of Europe. Beyond the courtroom, the trial will also have an impact on Spain's political scene, says Antonio Barroso, deputy research director at the Teneo Intelligence analysis group.
“The Catalan issue is at the heart of debate in Spanish politics and this trial, by recalling what happened in 2017, will be used by the right to criticise any (government) negotiation with the separatists,” he says.
Socialist Prime Minister Pedro Sanchez, who came to power in June after ousting Rajoy, needs the votes of separatist national lawmakers to pass his 2019 budget and stay in power.
Far-right party Vox, meanwhile, is taking part in the trial as the so-called “popular prosecution,” a Spain-specific legal mechanism that allows any citizen or organisation to make their accusations. 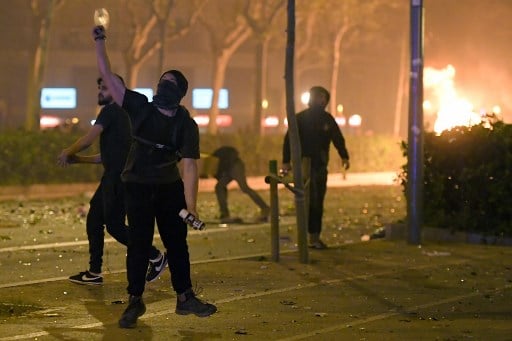 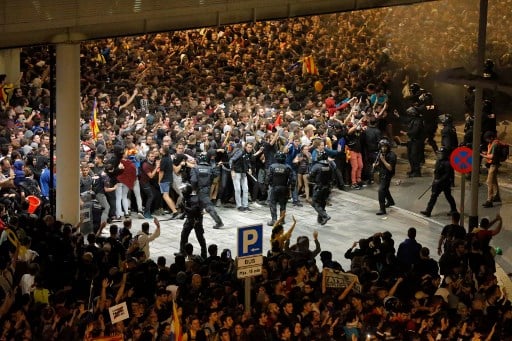 TRIAL
Flights cancelled, roads closed: What you need to know about the Barcelona protests
Url copied to clipboard!