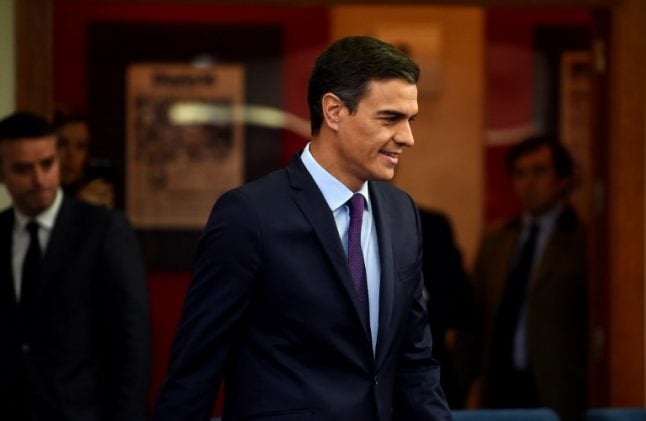 Pedro Sanchez is under fire over the concession. Photo: AFP

The controversy comes just days before the highly sensitive trial of 12 Catalan separatist leaders begins and as Pedro Sanchez tries to pass his 2019 budget, for which he needs the support of Catalan pro-independence lawmakers in the national parliament.

It centres on a decision by Sanchez to accept the presence — as asked by Catalan separatists — of an independent “rapporteur” in future talks between parties in the northeastern Spanish region.

These talks will take place in parallel with negotiations between the central and Catalan governments as Sanchez tries to ease a secession crisis that came to a head in October 2017 when separatists made a short-lived declaration of independence.

The seemingly minor concession has caused a furore as critics accuse Sanchez's socialist government of yielding to the “blackmail” of separatists in order to get the budget approved and maintain his hold on power.

Not so, retorted Foreign Minister Josep Borrell, who stressed the talks between Catalan parties monitored by this rapporteur would not in any way affect “state institutions nor relations between the government and the
Catalan executive.”

«…destiny is the one that shuffles the cards, but we are the ones we play.» W.S.

No matter. The conservative Popular Party (PP), centre-right Ciudadanos and far-right Vox have all called on their supporters to take to the streets of Madrid on Sunday against Sanchez.

The three-way show of force comes after the PP and Ciudadanos formed a regional government coalition in southern Andalusia following December elections with the support of Vox.

Opinion polls say the three parties could even form a majority at the national level if early general elections were called.

“A felon,” “illegitimate” “traitor”, “compulsive liar”: PP head Pablo Casado has been scathing towards Sanchez after his concession to the Catalans.

He has even touted a no-confidence motion, although this has little chance of succeeding.

“The government made a miscalculation,” says Fernando Vallespin, a political scientist at the Autonomous University of Madrid.

“It thought it could convince people that this (rapporteur) figure was harmless (but) it is clear that it's an unacceptable concession that crosses a red line” for Sanchez's critics, he added.

They accuse him of “having called into question a fundamental principle in order to remain in power.”

Sanchez heads up a minority government, with his socialist party having just 84 lawmakers out of 350.

He therefore needs the votes of Catalan separatist lawmakers — alongside others — to approve his 2019 budget and remain in power until the next general elections planned for 2020.

But his strategy has even caused discontent within his own party as top-level officials, who have criticised him in the past, voice their unease at making concessions to Catalan leaders who are dead set on breaking away
from Spain.

The discontent comes just months before municipal and regional elections on May 26.

“Approving a budget doesn't justify concessions that call into question the constitution, Spain's unity, the rule of law or decency,” said Javier Lamban, the Socialist president of the northeastern region of Aragon.

So far, separatist lawmakers in the national parliament are refusing to approve Sanchez's budget, even if they helped him come to power in June by voting for a no-confidence motion against then conservative prime minister Mariano Rajoy.

And Sanchez's concession on the “rapporteur” has not swayed them yet.

“There is still a lot of work to do” before that can happen, Catalan government spokeswoman Elsa Artadi said Thursday.