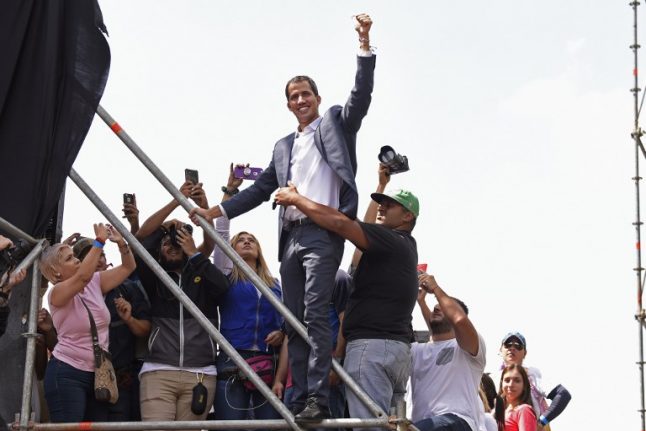 Opposition leader Juan Guaido gestures at thousands of supporters during a gathering in Caracas on Sunday. Photo: AFP

The Spanish Prime Minister then urged the 35-year-old National Assembly head to “call elections as soon as possible, elections that have to be free and democratic”.

Sanchez added he wanted to spearhead a plan of humanitarian aid for Venezuela in the European Union and United Nations.

France, Germany, the Netherlands, Portugal and Austria have also said if Maduro does not call snap elections they will recognise Guaido as Venezuela's legitimate president.

Already recognised by the United States, Canada, Australia and several Latin American countries, Guaido is trying to force the socialist leader from power so he can set up a transitional government and hold new elections in the oil-rich but impoverished country.

Seven EU states had given Maduro a Sunday midnight deadline to call presidential elections or they would recognise Guaido.

But Venezuelan President Nicolas Maduro on Sunday rejected a call by European countries to organise elections.

Maduro said in an interview with Spanish television station Sexta that he would not “cave in to pressure” by those calling for his departure.

“Why does the European Union have to tell a country in the world that has already had elections that it has to repeat its presidential elections, because they were not won by their right-wing allies,” said Maduro, interviewed in Caracas.

“They are trying to corner us with ultimatums to force us into an extreme situation of confrontation,” Maduro said.