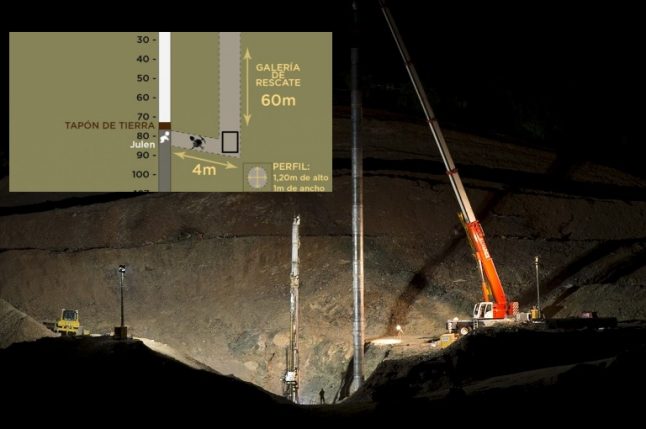 The desperate search is still on to find Julen, the two year old boy who fell down a narrow 100-metre borehole in the Malaga village of Totalán on January 13.

Hopes of reaching the young boy on Tuesday were dashed after rescuers were unable to fit in the casing meant to protect miners through the hole they’d dug parallel to the well where Julen is believed to be.

Seeing that the casing was only wide enough to reach down 42 metres, the rescue team was left with no other choice but to pull it back out and start again.

By Tuesday afternoon miners began by making the hole wider as well as straighter, as bends in the shaft had also made it difficult for the casing to be fed through to the area Julen is believed to have fallen to, between the 60 and 80-metre mark. Almost there and only four metres to dig

By understanding the terrain better, they have since been able to make progress, although they have had to reshape the tunnel's walls again for those final 20 metres.

It's now only a matter of hours before the 60-metre mark is reached and work can kick off on the horizontal tunnel.

Once the final security checks are carried out on the six-metre casing cylinders joined together, the eight chosen miners will be able work with a pickaxe and their own hands on digging the final four metres that separate them from the 25-centimetre narrow well that Julen fell through.

They will work in twos cramped and on their knees or lying down due to size restriction of the casing, taking shifts of 40 minutes.

Without the steel tubing, the miners would be unprotected against all potential landslide and rock falls in an area that’s already proven itself to be geologically unstable and where 40,000 tonnes of earth have been dug up in the last ten days.

This particular job still entails risks for them however as they’ll have to resort to traditional mining practices.

“We’ll have to fit or hold beams on the ceiling and sides of the hole and prop them up with wood,” former battalion chief Santiago Súarez, who’s helping with the rescue mission in Totalán, told El Mundo.

This will hopefully prevent this uncased horizontal hole from collapsing before another protective casing can be fitted.

This final dig should last no longer than 24 hours , says Ángel García Vidal, coordinator of the rescue operation.

What if the child isn’t there?

In the event that the rescue team has made the wrong estimation about Julen’s whereabouts, “the miners will have to dig upwards and widen the well’s diameter, Suárez explained.

SEE ALSO: The images that tell the story of the search for missing Julen