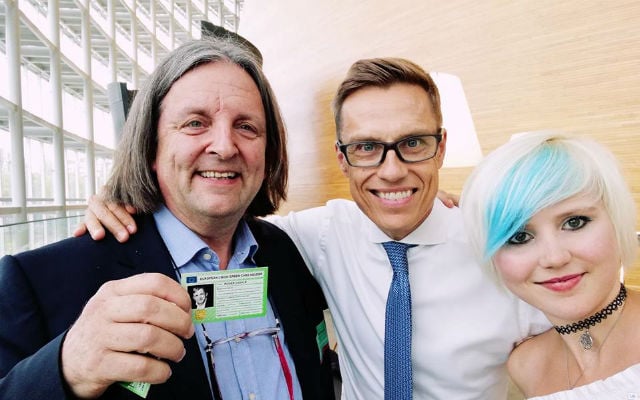 A campaign by New Europeans is lobbying the EU to intervene in Brexit and issue a card that would offer “privileged status” for UK nationals currently living in the EU, as well as for Europeans settled in the UK and essentially allow them to keep their treasured freedom of movement.

The campaign is being led by Roger Casale, a former Labour MP who now lives near Florence in Italy and who heads the New Europeans.

“The Green Card would ring-fence the rights that you had as an EU citizen,” Casale told The Local. “It would create equivalent status.”

With nearly 55,000 signatures and counting, a petition on change.org started by Casale is slowly gathering steam.

An EU-issued “Green Card” could be a vital addition for the 3.6 million or so EU nationals living in the UK, as well as the 1.2 million or more Brits in Europe.

Under his plan the EU Commission would issue a resolution to offer the 'five million', UK nationals living in the EU and EU citizens living in the UK, the right to a special recognition for having acquired residency before Brexit.

This would effectively guarantee a sort of privileged status, far greater than the rights agreed under the current Withdrawal Agreement, for five million UK and EU citizens whose rights are set to be stripped back by Brexit.

A Green Card would enable British citizens who have already exercised their treaty rights before the Brexit to retain free movement, a right that will be lost if Theresa May's Withdrawal Agreement is ratified.

It would help restore a sense of “status” and “privilege” that EU citizenship entailed, Casale said.

It would also help EU citizens in the UK prove that they have settled status swiftly and efficiently to obtain the services, employment and housing benefits that settled status affords.

Casale's idea has already been applauded by the Financial Times and New Europeans is the 2019 recipient of the Schwarzkopf Award. Casale's organisation was also the recipient of the CiDAN/ESDA Europe award in late 2018,  “in recognition of New Europeans' leading role in the campaign to safeguard the rights of EU27 citizens in the UK and Britons in Europe following the Brexit referendum.”

Casale himself has also received a Medal of the President of the French Republic. But it is the response from key EU institutions that will matter most.

“It's at a critical stage,” said Casale, a former Labour MP for the London constituency of Wimbledon.

“The Green Card works regardless of if there's a deal or no deal,” adds Casale, a British citizen, who has settled near Florence in Italy. “The rights afforded it by such a scheme would be for life.”

Casale is due to give evidence at the Constitutional Affairs Committee of the EU parliament (AFCO) in early 2019.

How does he hope a Green Card could come about and what kind of time frame can we expect?

If AFCO makes a proposal, the EU parliament would then vote on it. Should the European Parliament approve the idea, the EU Commission would then have to pass a resolution for the EU Council to vote on. The minimum timeline would be 12-18 months in a best case scenario, Casale admits.

New Europeans hopes the platforms it has created for citizens rights in the EU, such as Friendship Group on Citizens' Rights, the 20-MEP strong cross-party group at European Parliament, will help raise the campaign's profile.

“It was always my view that there would be a problem to rely on the Withdrawal Agreement. The risk of not getting what you want was always too great” says Casale, explaining how New Europeans and citizens' grassroots campaign group British in Europe ultimately pursued different strategies and objectives in pursuit of similar goals.

“Somebody needed to have a Plan B,” says Casale, whose organisation's focus is on lobbying the EU institutions to help resolve the impasse on citizenship rights, rather than lobbying Brexit negotiators directly, an approach preferred by British in Europe and the3million, which represents EU citizens in the UK.

“We didn't feel that it was right to go into the negotiations,” adds Casale.

British in Europe and New Europeans continued to work together and in parallel, from one group attending the other's mass lobby on parliament in February 2017, to giving evidence to the same European Parliament committees.

One of the appeals behind the Green Card campaign is that it is is cross-party and endorsed by voters on both sides of the Brexit divide, argues Casale. “A lot of Leave voters think EU citizens' rights should have been sorted two years ago,” he says.

The EU has the experience to implement such a system – a Blue Card, a “work permit issued to highly-qualified non-EU citizens” is already in place.

“They already have the set up and the machinery. They only need to change the ink from blue to green,” quips Casale.

The former MP with extensive networks among MEPs is confident there is broad support for the motion in the European Parliament. Whether that can translate into getting Brits in he EU free movement will depend on how the EU chooses to react.

That could depend on whether the UK continues to remain on course for a potential exit without a deal from the EU. Such a scenario would see UK nationals living in Europe at the mercy of legislation of individual Member States (France and Germany have already passed contingency laws), as there would be no Withdrawal Agreement or pan-European motion to protect them.

A Green Card would be one option to fill that void.

READ MORE: Quiz: How well do you know Brexit?