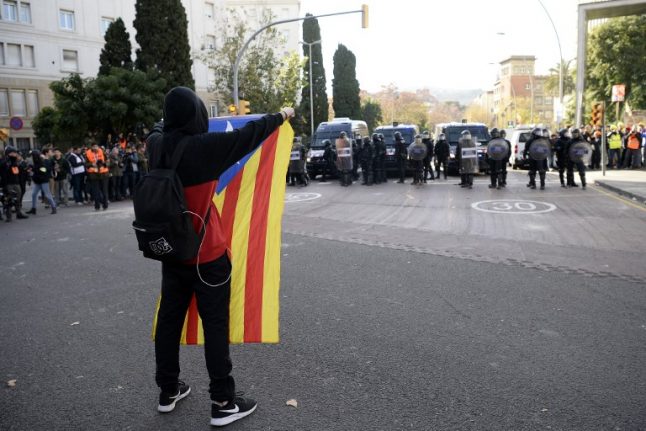 A protester holds a Catalan pro-independence flag opposite members of the Catalan regional police force Mossos d'Esquadra during a demonstration in Barcelona on December 21, 2018. Photo: Josep Lago

The court ruled that the six former lawmakers in Catalonia's regional parliament should be tried by a local tribunal. They include one from the far-left, pro-independence CUP party and five others who were a part of a bureau charged with organising the assembly's work.

Putting the six on trial in Madrid would “superfluously amplify” a case that is already expected to be long and complex, the court said in its ruling. It responded to an appeal by the six defendant's lawyers.

The defendants were deputies in the Catalan regional parliament that was dissolved by the Spanish government in October 2017 after the assembly declared independence.

They have been charged with disobedience for putting bills deemed unconstitutional to a vote in the parliament. The bills included one which called an October 1, 2017 independence referendum despite it having been banned by Spanish courts.

Catalan separatist leaders declared independence based on the results of the referendum, prompting Spain's central government to suspend the region's autonomy.

Twelve other Catalan leaders charged with the more serious crimes of rebellion and/or misuse of public funds related to last year's separatist push are to be judged by the Supreme Court however.

Nine of those defendants are being held in pre-trial detention. Public prosecutors are seeking prison terms of up to 25 years in the case of former Catalan vice president Oriol Junqueras.

The Supreme Court held a preliminary heading in mid-December to settle procedural issues ahead of the sensitive trial, which is expected to get underway in early 2019. That trial does not concern seven other Catalan leaders who fled abroad following the independence bid, such as deposed regional president Carles Puigdemont, because Spain does not allow for trials in absentia.

Catalan separatist parties consider the defendants to be “political prisoners” and many separatists wear yellow ribbons to express support for former Catalan leaders in jail or in self-imposed exile.