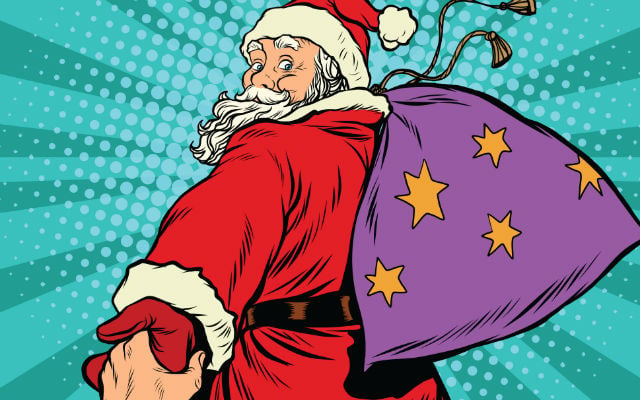 The Christmas spirit and festive relief will be much appreciated by those weighed under by the Brexit saga. But will Brexit in fact turn out to be the future grinch of British Christmases?

Santa could face logistics and supply chain issues in the UK if the country does eventually leave the EU with no deal. Santa and his reindeer could face long queues at Calais or find they don't have the right to enter British airspace.

Santa would then either have to set up a UK subsidiary or avoid delivering too many fresh cakes, treats or presents that could spoil.

The British government has also promised that Brexit will mean a tougher approach on immigration, although it’s unclear whether the UK would adopt the ‘Norway model’ and ban Swedish reindeer from entering the country. Santa might then not be coming to town. Turkey, champagne, port wine and sweet Italian cake are all linked to the spirit of Xmas – and to the EU.

Some British festive habits even crossed the Channel from Europe. In 1841, Prince Albert, Queen Victoria’s husband, allegedly brought a Christmas tree from Germany to the UK, importing a tradition that has found its way into every British living room ever since. Martin Luther is apparently credited with having invented the Christmas tree.

It might have originally been an import from Europe, but higher costs for Polish and Danish trees to reach British shores meant UK-based growers were hailing Brexit as a victory for domestic-grown trees in 2017, according to a report in Horticulture Week.

British Christmas turkeys rely distinctly on EU labour. Some 90 percent of seasonal workers, who help breed and slaughter turkeys in the UK, are from Eastern Europe – mainly Poland, Romania and Hungary, according to a report in the Financial Times.

READ ALSO: A big, fat Italian Christmas: how Italy does it bigger and better

“We wouldn’t be in business without migrant workers and we won’t be in business in the future without them,” MD of a turkey company Paul Kelly, also chairman of the British Turkey Federation, told British daily Metro.

Polish workers are increasingly turning their back on the UK and instead seeking similar work in the Netherlands or Germany, states that report.

Brits love a Christmas toast with champagne too, a fact confirmed by the United Kingdom’s position as the former leading consumer of the French sparkling wine in the world.

Yet the head of the Union of Champagne Houses (UCH), which includes brands such as Moet & Chandon, said already at Christmas last year that the USA had dethroned the UK as the largest bubbly consuming nation. Brits are increasingly opting for cheaper alternatives.  And it isn’t just champagne that Brexit has in its sights. The price of a bottle of port wine, a Christmas favourite with mince pies, will rise to offset the extra costs Brexit entails.

“We will have to gradually raise our prices in the coming years to cover losses,” Adrian Bridge, president of Fladgate Partnership – which owns leading port brands such as Taylor’s and Fonseca, told Forbes’ Portuguese-language outlet Forbes.pt, while discussing Brexit. Sales to the UK represent 30 percent of the company’s annual turnover, claims the Forbes report.

A slice of panettone cake is also popular in Britain. The United Kingdom is the third largest consumer of all Italian Christmas cake exports. Nearly 10 per cent of all panettone and pandoro cake exports from Italy go to the UK, according to Confartigianato, an Italian growers union which has warned that a no-deal Brexit could add substantial costs for its members who export heavily to the UK.

Italian companies generated more than €43,2 million in sales in the UK during the festive period in 2016, accounting for 11.1 percent of all total exports in the sector, reported Confartigianato, a lobby group of Italian manufacturing firms.

Bonus viewing: BBC Newsnight's border-to-border (Muff to Dover) road trip across the UK while discussing Brexit tries to feel the pulse of the British public on Theresa May's Brexit deal before Christmas 2018.

READ ALSO: The food and drink you need for an Italian Christmas feast

READ ALSO: The story behind France's 'little saints' of Christmas

READ ALSO: Your essential guide for doing Christmas just like a German