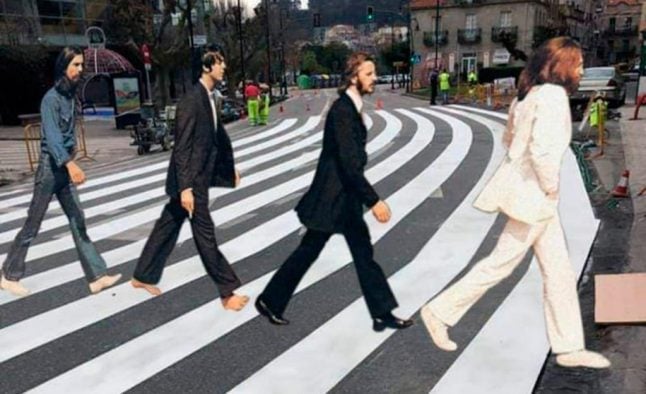 Cangas de Morrazo in Spain’s rugged, windswept region of Galicia isn’t a place many Spaniards, let alone foreigners, have ever heard of.

But this sleepy, seaside resort has become an internet sensation since it recently unveiled a gigantic new zebra crossing measuring 40 metres in width, so wide that it bends round a corner and takes up part of two separate streets.

Town authorities claim the decision to paint zebra lines the length of ten cars parked front to back is a means of giving priority to pedestrians rather than seeking attention.

But the mammoth crossing has been met with more laughs than applause, starting with the 21,000 residents of Cangas.

“It’s a bit over the top but I guess it’s something that makes the town stand out,” one passerby told Spanish TV station Antena 3.

“I don’t know why they’ve chosen this spot, every time I walk down here there are only four or six people wanting to cross,” another elderly resident added.

“We aren’t that many people,” a mother concluded.

On social media, the Cangas zebra crossing has been transformed into a racing track, re-immortalized as The Beatles’ famed Abbey Road crossing, reimagined as lines of cocaine for a pleasure-seeking Maradona and dubbed a “dinosaur crossing”.

“We didn’t want to beat any records but if that’s the case, so be it,” Cangas mayor Xosé Manuel Pasos told daily El Periódico.

Up until now, the biggest zebra crossing in Spain has been on Madrid’s emblematic Gran Vía avenue, which has an average 73,000 pedestrians walking its sidewalks on a daily basis.

Spaniards are also the world’s most prolific walkers, according to a 2017 Fitbit study which included 30 countries. Walking on average 9,023 steps a day puts Spanish people top of the table but still below the WHO’s recommended amount of 10,000.

There is no official data on the longest zebra crossing in the world, but Tokyo’s famous Shibuya crossing is considered the world’s busiest crossing with upwards of 3,000 pedestrians with every green light during peak hours.