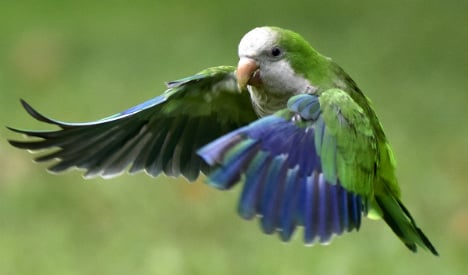 For some they are a cute, colourful, chatty addition to park life but to others they are a noisy parasite whose vast numbers overshadow quieter native fauna and threaten to destabilize the ecosystem.

What is in no doubt is that the population of wild parakeets in Spain has soared to uncontrollable numbers since they were first introduced to Spain as pets in the 1970s.

They first arrived from South America in cages to be kept as pets in cages but after being released or allowed to escape into the wild they have taken up residents in parks and green spaces in cities across Spain, competing for food and habitat with pigeons, sparrow, owls and woodpeckers.

Environmental experts in Malaga, home to one of the largest colonies of the bright green and grey-breasted birds, have now proposed that the best way to control their population is by sending teams of snipers to shoot them down.

A panel pf experts at an environmental forum at Malaga’s UNED university last week came up with recommendations to control the population, estimated at 30,000 in Malaga alone.

Classified as an invasive species, Spanish authorities are allowed to take measures to cull them, and in 2011 sales of the bird were banned in the country in the hope of preventing more from finding their way into the wild.

Previous attempts at population control have been tried in various parts of Spain over the years, but with little success.

A team in Zaragoza has been climbing up to the nests and piercing eggs with a very fine needle and leaving them there to deceive the adults into thinking they were viable when they weren’t, had little effect.

And destroying nests only served to move the colony on to nearby areas.

The birds which originate from Argentina, Brazil, Paraguay, Uruguay and Bolivia, build communal nests that weigh up to 50 kilos (110 pounds), mostly in trees – they favour cedars – but also in electric pylons.

In order to do so, the parrots tear thousands of branches off trees, at times leaving them nearly bare.

The birds have even been blamed for pushing an endangered species of bats closer to extinction. Scientists discovered that the birds were responsible for attacking the greater noctule bat, the largest bat in Europe, pulling the winged mammals from their holes to take over their nesting sites.

Trapping parakeets is no longer a viable option for population as they now exist in such vast numbers.

Dailos Hernández-Brito, researcher at the Biological Station of Doñana and on the panel at the UNED forum told Spanish news agency EFE that shooting the birds using trained snipers was the most effective method of culling the invader species.

But animals rights party PACMA as well as left wind Podemos have openly criticised the plan, insisting that trapping and caging the birds would be a more ethical solution.

READ ALSO: Archers to the rescue in Madrid as boars invade urban areas