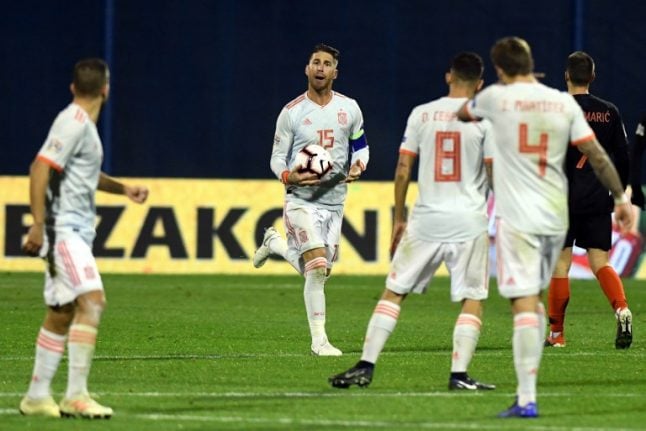 Deep in the belly of the tiny 7,083-capacity Ipurua stadium, Ramos said his side's attitude had been off, their intensity lacking. “When you don't match your opponent, you become a vulgar team,” he said.

It was not the result Real wanted before they travel to Roma in the Champions League on Tuesday, when the winner is likely to go through top of Group G.

Then Ramos moved onto the anti-doping allegations published on Friday by German magazine Der Spiegel.

The most damaging among them claimed Ramos tested positive for dexamethasone after the 2017 Champions League final and failed to declare it, as is required according to World Anti-Doping Authority regulations.

Responding for the first time, Ramos said: “You can tell a lie many times over but it is still a lie.”

He added: “These types of people try to stain my reputation and my professional career.”

The issue may have been exceptional but the sharpness of tongue and apparent readiness for confrontation has become a vivid part of Ramos' football persona.

In September, Antoine Griezmann was in the firing line when Ramos used a Champions League press conference to slap down the Frenchman's pinings for the Ballon d'or

More recently, he turned Antonio Conte from favourite to no-hoper in the running to replace Julen Lopetegui as Real coach. “Respect is earned, not imposed”, Ramos said, supposedly a dig at Conte, a renowned disciplinarian.

This pugnacious Ramos off the pitch chimes so perfectly with his demonic reputation on it and so it seems possible that one of the game's most reviled characters has begun to revel in the noise that surrounds him.

He is loved by Real Madrid, their captain and winner of four Champions League titles, as well as another four in La Liga. He is liked too at the Benito Villamarin, where Real Betis fans still appreciate him leaving their
rivals, Sevilla.

But there are few stadiums where the sound of screeching whistles are not heard as soon as Ramos leaves an opposition striker in a heap.

Lionel Messi knows the feeling. In 2010, Ramos lashed him to the ground with a swinging left boot and in 2017, clattered him again, sliding in as Barca threatened a counter-attack.

Both times, Ramos was sent off, two of his 19 La Liga red cards, the most of any player still playing by quite a distance.

There would be more if referees had interpreted differently all flailing arms, charging shoulders and misplaced feet too ambiguous to be deemed deliberate.

Mohamed Salah missed most of the World Cup finals after one such tussle in the Champions League final.

“No one's nose is more fractured than Ramos',” Santiago Solari said this month. “There is no bad intention, he always plays fair. This is a contact sport.”

Ramos has long been a colossus for Real Madrid and, over the past decade, arguably the finest central defender in the world.

The concern, however, is that this season, for club and country, he has been nowhere close to those standards.

His increasingly error-ridden partnership with Raphael Varane at the back became as much a problem for Lopetegui as a lack of firepower up front.

Sevilla and Barcelona each took advantage, to the tune of eight goals between them.

England capitalised too, winning 3-2 in Seville, and then Croatia did, by the same scoreline in Zagreb.

While Ramos is far from solely culpable, some are beginning to wonder if he has become too eager to pick a fight. His focus might have wavered.

Ramos admitted on Saturday he had been aware for months of the anti-doping allegations and it is possible angst has taken its toll.

It is also true the 32-year-old has often underperformed at this stage of the season, only to become faultless around the time the trophies are handed out in May.

With a new coach, the Champions League group stage getting tight and six points to make up in La Liga, Madrid could do with that upswing to come early.

They need Ramos now more than ever, not the brawler or the bravado, but the player.