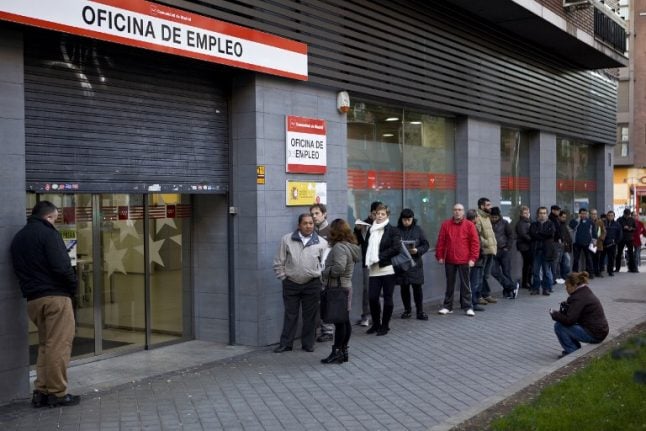 People line up outside a job centre in Madrid. Photo: AFP

A combination of low wages and reliance on temporary contracts is keeping millions of workers stuck below the poverty line — nearly one in six, according to labour ministry figures.

The country has the European Union's highest proportion of workers at risk of poverty, 13.1 percent, after Greece and Romania, according to 2016 Eurostat figures.

Spain's economy shrank during the financial crisis from 2009 to 2013 but rebounded in 2014. Its rate of expansion has since outstripped much of the EU with growth of more than 3 percent.

But the recovery has bypassed many workers like Elisabet, a 44-year-old Madrid waitress who is employed on a three-month contract.

Another €130 is swallowed up by school canteen fees, €100 goes to childcare, leaving just over €300 for food, transportation and other expenses.

“I can't save, it's a bit complicated,” Elisabet, who asked that her last name not be published, told AFP, adding she has not been able to go on holiday with her daughter for two years.

Spain's economic downturn sparked a “freeze on wages” and salaries did not recover when the economy returned to growth because unemployment has remained high, said Florentino Felgueroso of Madrid-based think tank Fedea.

While Spain's jobless rate is down from a peak of nearly 27 percent in 2013 to 14.5 percent in September, it is still the second-highest in the eurozone after Greece.

Real wages actually declined in the last two years, the OECD said in a report published in July.

This contrasts with the jump in salaries before the crisis, especially in the construction sector, said Felgueroso.

Part of the problem is that many of the newly created jobs are temporary rather than permanent, and their duration has been reduced considerably, with some lasting just “a week, sometimes less”, he added.

The percentage of workers in Spain employed part-time when they would rather work full-time accounted for 8 percent of the total labour force in 2016, compared to 6 percent in the entire eurozone, according to the Bank of Spain.

Elisabet is a good example. Despite her 15 years' experience, since the end of the crisis she had only one permanent contract — and was fired after just one year.

She said she feels lucky to have a temporary contract, instead of working under-the-table as in the past.

Socialist Prime Minister Pedro Sanchez, who took office in June, has vowed to fight for change.

Under Spanish law temporary workers have to be considered permanent after a period of two years, except in the case of short-term projects or seasonal jobs.

But loopholes in Spain's complex labour framework, which comprises dozens of different contract types, allow many firms to circumvent the rules.

The labour ministry in August contacted nearly 80,000 firms it suspects of abusing short-term contracts. Some 47,000 of these contracts were converted to permanent ones the following month.

The government also wants to increase the number of labour inspectors to crack down on abuse.

“It's very difficult to correct, it is part of regular practice,” said Felgueroso.

Sanchez's minority government has also proposed in its draft 2019 budget — which faces an uphill battle to be approved in parliament — raising the minimum wage from €858 a month to €1,050.