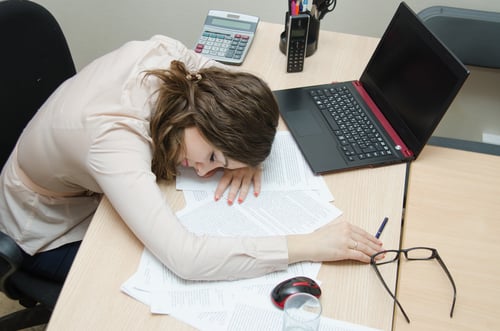 1. “I'm struggling to focus today as I didn't get to bed until 1.30am – it was the final of Masterchef Junior!”

For Spaniards, staying in of an evening doesn't necessarily mean having an early night. Prime time television shows are not usually broadcast until at least 11pm and can continue until well into the early hours so whether it is the latest episosde of Game of Thrones, the Masterchef final, or El Clásico football match, it's essential chat for the water cooler but could well leave you bleary-eyed and mainlining coffee the next day. 2. “Turn up the volume please, I can almost hear myself think.”

Spanish people are notoriously noisy. If they are not raising their voices when talking on the phone, gossiping loudly with their colleague at the next desk or just shouting to get the attention of someone across the room, then the radio or television is cranked up to full volume to fill the silence. The peace and quiet of The Local's office in Madrid is regularly interrupted by bursts of opera drifting down the corridor as the lawyer next door fills in time between clients. Since a smoking ban was imposed in the workplace in January 2006 tobacco addicts who can't be bothered to trek to the nearest exit and stand out in the street tend to congregate in the men's toilets for a communal not so sneaky fag. As one male office worker told The Local: “The smokers huddle at the open window right next to the urinals – women too. The latter offer to leave if any men come in for purposes other than smoking. It's a bit like being back at school!” 4. “Have a lovely summer holiday – see you in September.”

It used to be that entire companies would just shut up shop for the summer and while that practice isn't as widespread as it used to be, it's not unusual for small business owners to hang a “cerrado por vacaciones” sign in the window before heading off for the playa. Lots of employees are still given the option to take most of the month of August off and summer timetables are put in place anywhere that suffers searing temperatures, from Salamanca to the south, meaning there is plenty of time for snoozing in the afternoon heat before a dip in the municipal pool. The stalwart tradition of the office breakfast exodus is hard to avoid. You may only have been in work for an hour and a half but come 11am everyone ups sticks and heads for the nearest cafeteria for a coffee, tostada and a good old gossip. Some offices, especially public administration, insist only groups of four workers from each section can take their desayuno at one time, so it can be a rush to fit it in, but you will be considered odd to forfeit it all together and opt to grab a takeaway cup of coffee instead. 6. “See you in two hours, just popping out for lunch”

The Spanish culture of long lunches is somewhat of a national stereotype and for good reason. For Spaniards a proper lunch is considered sacred and to this day many business deals will be sealed not in the boardroom but over a menu del día, sloshed down with a bottle of vino, a postprandial liqueur and a cigar. It may be that few people nowadays live close enough to their workplace to nip home for a siesta but the allotted lunch break hasn´t changed, making it very difficult to get hold of anyone between 2 and 5pm. 7. “What do you mean, you have brought in a sandwich?”

The concept of eating a sandwich for lunch is not one that is well understood in Spain (see above). While the bocadillo may suffice as a snack to be grabbed hastily on the road it is not considered sufficient sustenance for the worker and colleagues will be incredulous if you attempt to stay at your desk and unwrap a sarnie. Any sort of packed lunch is generally looked down on but if needs must nothing less than a collection of 'tuppers' filled with dishes – preferably home-cooked by mum – would be acceptable. 8. “I don´t know why that wasn't done – I specifically told the intern that it was their job to finish it.”

Spanish companies are filled with  'becarias' – interns, work-experience kids, trainees  – and they all have one thing in common. They work hard, for very little or no money and an even slighter prospect of securing permanent employment at the end of it. With more than 50 percent of youth unemployment there is always some young person willing to step in as general dogsbody in the hope of gaining much needed experience.  And the advantage for everyone else is they make an ideal scapegoat. Spain’s culture of long working hours (Yes, a recent survey showed the Spanish worked more hours than both the Germans and the French) means that if you work in an office there is every chance you won´t be clocking off until the evening is well under way, at least by northern European standards anyway. But there’s still time to nip out for a gin and tonic before heading home for dinner which won't be served until at least 10pm. From paper cuts and stubbed toes to a slip on the stairs and a mild concussion, Spaniards like to get a professional opinion whatever the ailment. And when you consider they need a doctor’s note to excuse them a day off work, it’s no wonder Spaniards spend so much time seeing their local médico. And here´s one you will never hear: “If you have completed your jobs why don´t you pop off early while I finish up?”

One of the repeated gripes of those employed in Spanish offices is the culture of “presentismo” – the perceived need to be present in the office even when you don´t have anything pressing to do. People will sit at their desks long after they have completed their actual work for the day just to be seen there until after the boss has gone home. When the jefe walks out the door, the stampede of those rushing for the exit follows soon after.

Read our Top Ten Spanish slang expressions to use at office

LIFE IN SPAIN
What are the penalties for drug possession in Spain?
Url copied to clipboard!