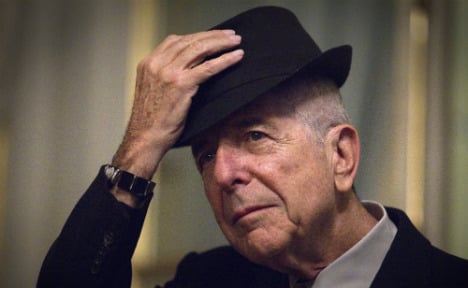 Those familiar with Cohen’s work will know how he was influenced by the Spanish poet Federico Garcia Lorca – even naming his daughter Lorca – and that many of his songs included flamenco style refrains.

But the full extent of Spain’s role in shaping his music was only revealed when he came to Spain five years ago to accept the nation’s most important literature prize.

In 2011, when Cohen visited Oviedo to collect the Prince of Asturias Award for Literature, he explained how, if it wasn’t for a chance meeting with a Spanish flamenco guitarist in his home town of Montreal as a young man, his music and career may have been very different.

He went on to recount how after coming across the guitarist in the local park he persuaded the Spaniard to give him a few lessons. After the guitarist failed one day to turn up to the class, Cohen discovered that he had taken his own life.

That flamenco guitarist taught Cohen six chords.  “It was that guitar pattern that has been the basis of all my songs and all my music,” he explained to the audience in Oviedo adding: “So, now you will begin to understand the dimensions of the gratitude I have for this country.”


Cohen's 1986 song “Take This Waltz” was based on Lorca’s poem “Little Viennese Waltz” and part of the video was filmed in Granada.

During the speech he explained how Lorca had helped him find his voice and the flamenco guitarist his song.

“I could say that when I was a young man, an adolescent, and I hungered for a voice, I studied the English poets and I knew their work well, and I copied their styles, but I could not find a voice. It was only when — when I read, even in translation, the works of Lorca that I understood that there was a voice. It is not that I copied his voice; I would not dare.

He also revealed how for forty years his instrument of choice was, in his words, a “Conde guitar, which was made in Spain in the great workshop at Number 7 Gravina Street”.

Speaking of his decision to come to Spain to accept the prestigious award he said: “I inhaled the fragrance of cedar as fresh as the first day that I acquired the guitar. And a voice seemed to say to me, “You are an old man and you have not said thank you; you have not brought your gratitude back to the soil from which this fragrance arose.”

And so I come here tonight to thank the soil and the soul of this people that has given me so much — because I know just as an identity card is not a man, a credit rating is not a country.”

He ended his speech: “Everything that you have found favourable in my work comes from this place.

“Everything, everything that you have found favourable in my songs and my poetry are inspired by this soil.

“So I thank you so much for the warm hospitality that you have shown my work because it is really yours, and you have allowed me to affix my signature to the bottom of the page.”