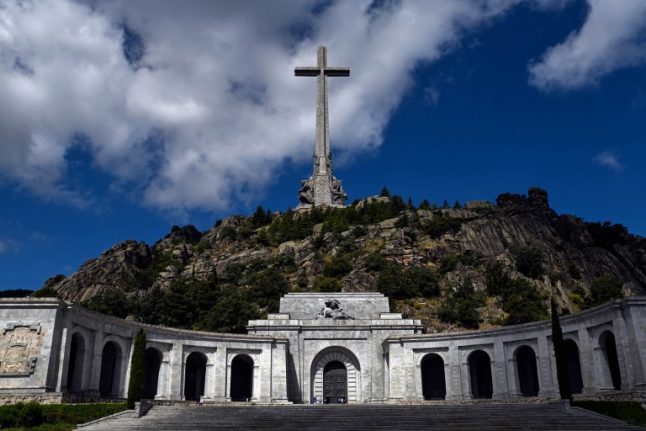 The tomb of Gen Francisco Franco lies in the Valley of the Fallen. Photo: AFP

It looked like a quick, potent, highly symbolic win for Pedro Sánchez’s shiny new socialist government over the summer, with the most women in a Spanish cabinet ever, and even a former astronaut.

A sudden boost of progressive energy after six long, dry years of conservatism, labour reform, unemployment and austerity. The ultimate socialist political trophy lay within easy reach: digging up Franco and throwing him out of the Valley of the Fallen.

In May 2017, indeed, Congress had passed a motion supporting the exhumation and the Popular Party (PP), then in government, had only abstained. A year earlier, only one female conservative MP, Celia Alberto, had “mistakenly” pressed the “against” button when it was time to vote.

Not very much had stood in the way of Mr. Sánchez claiming the prize, just in time for the 2019 election cycle with its local, regional and European ballots.

The socialists had even decided to go for an early general election too: “We are the left-wing party that finally got rid of Franco!”, the PM roared at the rallies. The crowds cheered, the TV cameras recorded it all and the voters crowded into polling stations. The PSOE, as well as besting conservatives and winning power at all levels across the country, taught Podemos a lesson as well, four years after Pablo Iglesias had said his own strategic goal was not to become Prime Minister but to dominate the Spanish left for a generation.

But history is not unfolding quite according to plan.

Perhaps, as James Badcock suggested in last week’s podcast conversation, the new government was expecting the Franco family would just shuffle him off quietly to some small, even tiny, village in Galicia that no one had ever really heard of. The more remote, the better.

Dig him up, hand him over, get a priest to open a Bible and say a prayer or two, and job done. A peaceful cemetery where it rains a lot, hours away from any real towns or cities, or any large groups of people, and preferably a place with no motorway access. Spain is a big country, with lots of empty countryside to lose a famous former dictator in.

The family, though, and the Catholic Church, are not being as cooperative as the socialist executive would like. The relatives, you see, own a crypt, not in a small church but in a cathedral, and not just in any cathedral, but in the Almudena Cathedral in central Madrid, right next to the Royal Palace itself, right on the edge of Franco’s favourite square in all of the Spanish capital, the Plaza de Oriente, with its lovely gardens and statues between the palace and the Royal Theatre, right in the beating heart of very old Madrid, the Madrid of the Habsburgs, right in front of the millions and millions of tourists who visit the capital every year, with very easy access on foot, by car, in a taxi, on a bus or on the underground. And the family might want to have him reburied with full military honours. They have cited a law passed by the previous socialist government as the reference on the matter. The big plan is backfiring on the PM and would cause problems for Podemos over in City Hall too.

The Vatican itself got involved last week, issuing a not very diplomatic statement denying a Spanish government communiqué that announced an agreement had been reached not to rebury Franco in the Almudena Cathedral.

Some conservative radio hosts and guests in Spain snorted in an ungentlemanly manner about the Deputy PM’s cleavage during her visit to Rome, and then Mr. Ábalos, the Public Works Minister, went on a bit of rant during a speech in Valencia, at one of the walls where they used to shoot people during the Civil War, saying the dictator’s descendant’s should be less “arrogant” and more “humble”. Insulting the other party in a key negotiation is perhaps not the best approach.

So not only will Franco probably not be exhumed by November 20th, the forty-third anniversary of his death, it is increasingly likely this urgent, quick win for the new government (“Not a minute can be lost!”, said the Deputy PM back in August) will now drag on into next year and smash right into all of those election campaigns unresolved.

The momentum now lies with the Franco family: all they have to do is to hold their current position and keep insisting on reburying their grandfather in the Almudena Cathedral. Instead of a historic socialist trophy being presented at Mr. Sánchez’s rallies, opposition parties on the right will be able to use the whole mess as more proof of socialist incompetence in government: “They can’t even dig up Franco!”.

Sensing blood, the PP and Ciudadanos, who control the Speaker’s Committee in Congress, announced on Monday that they would keep extending the period during which amendments to the reform of the Historical Memory Act—the legislation the government is using to remove Franco from the Valley of the Fallen—can be tabled. That trick, El Diario reported, has kept other bills in parliamentary no-man’s land since 2016.