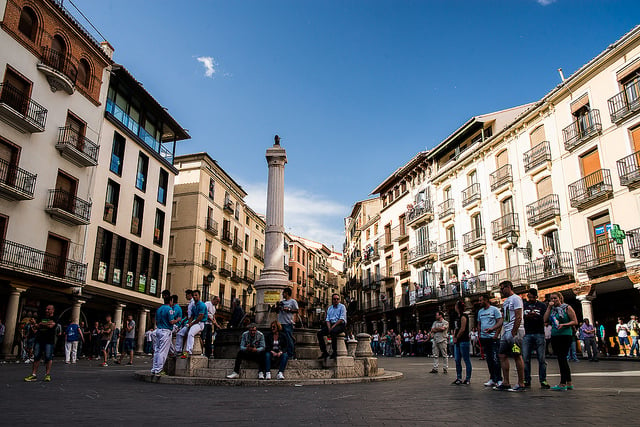 Ever been to Teruel? Photo: Fernando García Redondo/Flickr

With rent and food prices creeping up in many major Spanish cities, some foreigners might wonder whether they’re still getting the value for money España was once known for.

Tourism and overall demand has driven up rents and property prices in all the hotspots. According to a recent study by Kelisto, one of the country’s most used comparison sites, Barcelona is the most expensive city in Spain in 2018.

So how about the cheapest cities on the ranking and is it worth contemplating a move there?

Well, the ten least pricy cities to live in in Spain have a lot in common.

A lot of them are in Spain’s relatively empty Castilla y León region, most aren’t on the coast and all have populations under 200,000.

They also share breathtaking scenery, a rich history and a friendly, laidback spirit far removed from Spanish stereotypes and the hustle and bustle of the big cities. A quieter (and for some better) quality of life. Here’s the list of the top ten cheapest cities in Spain taken from Kelisto’s study, in which they looked at the cost of buying and renting a home, taxes, transport costs, food shopping and the price of activities. Our breakdown offers a bit more info on the pros and cons of each ciudad (city).

Pros: steeped in history and splendid architecture, by far the cheapest city to live in the whole of Spain.

Nutshell verdict: The cost of living is more than 30 percent cheaper than the national average, but it’s a fairly insular city with more past than present. Pros: Warmest climate on the list, on the coast and like living in two countries at once.

Nutshell verdict: Melilla is perhaps a strange choice for anyone wanting to live in what one might call ‘typical’ Spain, but if it’s multiculturalism, exoticism and proximity to North Africa you’re after, why not give it a go?

Also, filling up your petrol tank costs €50 in Melilla, 23 percent lower than the national average. Nutshell verdict: A Galician hidden gem. Yes, it’s wetter than central and southern Spain, but the lush forests and dramatic coastline an hour’s drive away make up for it. Lugo is also more lively and has a better bar scene than some of the Castilla y León cities on the list.

Renting a 80sqm apartment in Lugo costs an average €354 a month (the second lowest rent in Spain) compared to €1,150 in Madrid. Pros: In the heartland of Spain’s wine country, beautiful rural surroundings and an impressive food and drink scene.

Cons: Not as much impressive history and architecture as some other cities on the list.

Nutshell verdict: Logroño is a tidy little city which is quick becoming one of Spain’s culinary capitals. Couple that with Rioja wines on your doorstep and it’s definitely worth a visit and possibly a move for the fun-seeking foodies. Cons: As with most cities on this list, not a lot of international jobs Cons: sweltering in the summer, far from the sea and can feel like a desert.

Nutshell verdict: This city and region are the best embodiment of Roman Spain, so history buffs who can take the heat will get a lot of bang for their buck here. Pros: wonderful historic centre, safe (as with most Castilian cities on this list it has an almost zero crime rate).

Nutshell verdict: A quintessential Castilian city that offers good quality of life in a peaceful and picturesque setting.

Cons: A wicked winter wind, too far from Madrid to commute daily to by train or car (1h30).

Nutshell verdict: A deeply religious city that opens a door to old Spain without being too far from the capital.

Cons: sleepy, too far to commute to Madrid (2h drive).

Nutshell verdict: Soria – a tiny city set on the Duero river and surrounded by Castilian countryside – is a great place to live in if you’re looking for a quiet life away from busy or touristy Spain.

Beer drinkers will be delighted to know that the cheapest average caña price in Spain is in Soria – €1.25 – almost a third less than average across Spain. Pros: A historic city capable of rivalling Salamanca and Segovia, for its magical streets as much as for its bar culture and buzz.

Cons: Famed for its freezing winters and far from any beach.

Nutshell verdict: León is a hidden gem for anyone who wants to live an authentic Spanish town lifestyle.

It's also the city in Spain where it’s cheapest to go food shopping, 4 percent lower than the national average.