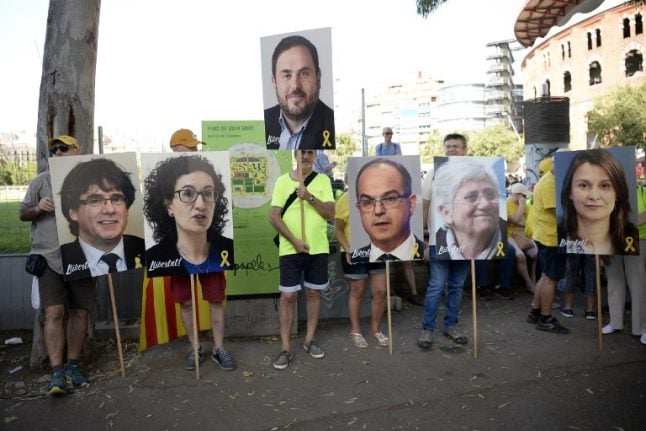 According to the State bar, their actions didn’t constitute what’s referred to in the Spanish Penal Code as ‘rebelión’ (rebellion or treason), primarily due to an alleged lack of proof of violent means during their October 2017 coup attempt.

Instead the charge has been reduced to sedition, also a conduct or language inciting rebellion against the authority of a state, but one without violence.

The reason why this is big news in the Spanish press is the difference in prison sentences. Those found guilty of high treason face 30 years behind bars whereas for sedition jail time is up to 15 years.

Last year’s attempted independence coup by numerous Catalan officials and their separatist followers polarized the region and Spain as a whole.

There were incidents of violence during demonstrations in Barcelona and across Catalonia, but it was Spain’s National Police force that received the worst condemnation for their aggressive conduct.

Nonetheless, nationalists and the country’s former ruling Popular Party are unlikely to accept the sedition charge as sufficient, hoping instead for the harshest possible sentence to send out a clear message to those vying for another independence push in Catalonia.

That's despite the fact that on Friday the prosecution service said it was seeking prison sentences against 12 Catalan leaders of up to 25 years, including Oriol Junqueras. Spain's conservatives are still calling for more.

“Months ago Sánchez argued that the separatists committed a crime of rebellion,” opposition PP leader Pablo Casado tweeted, a staunch nationalist with the same hardline approach to Catalan separatism as his predecessor Mariano Rajoy.

“He now uses state law to do Catalan leader Torra a favour. A hostage of the coup leaders, he is too discredited to continue presiding over the government and must call elections.”

Spanish conservative daily El Mundo went with the headline “Pedro Sánchez hands himself in to the coup leaders”, accusing the current Prime Minister of pandering to Catalan separatist parties, who he does in fact need to pass legislation in the Spanish Parliament, particularly with current national budget negotiations underway.

The Socialists do however refuse to allow any future referendum on self-determination, much like their conservative predecessors. Spain’s public prosecutors office has also reacted to the news by reaffirming its belief that the high treason charge should stand for Catalan officials such as Artur Mas and Oriol Junqueras.

The only people ever sentenced to high treason in post-Franco Spain were Antonio Tejero and Jaime Milans del Bosch, the men behind the failed military coup of 1981 in the Spanish Parliament.

Both received 30 year jail terms (Tejero famously shot his gun in the air during a hearing, leading MPs to duck under their seats, all except for then Prime Minister Adolfo Suarez).

It’s worth noting as well that many of the “procés” leaders still stand accused of the embezzlement of €3.2 million of public funds, punishable by sentences of up to 12 years in Spain when the amount embezzled is above €250,000.

Despite this, thousands of their separatist supporters went to Lledoners prison in Catalonia on Wednesday to demand the immediate release of their imprisoned politicians.