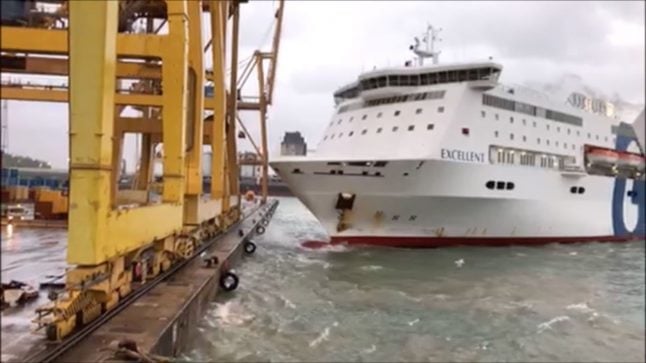 A bystander caught the unbelievable scenes on video on Wednesday morning.

The ferry is seen approaching the quay, but unable to stop, it crashes the vessel’s bow into a gigantic crane on the dock.

The structure then begins to capsize as dockworkers are pictured at the bottom of the frame sprinting away from the scene.

As the crane collapses, the cargo it is carrying explodes into a ball of flames.

According to port authorities the collision was caused by bad weather.

VIDEO (OT): Rough weather in Barcelona today caused a docked ferry to knock down a crane, which then fell onto cargo containers, which sparked a huge fire, which firefighters tackled for much of the day. #extremeweather pic.twitter.com/30zGkcPr2f

Strong winds blew the ferry off course, making it impossible for the ferry’s captain to get the vessel to stop in time.

Fortunately none of the 419 passengers on board were injured, nor were the port’s personnel, although two people had to be treated for anxiety.

A chemical safety plan was deployed following the explosion, but there are no indications that the cargo’s content was toxic.