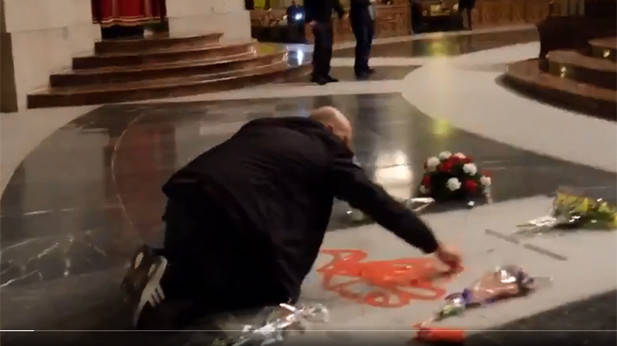 The artist/sculptor, referred to in the Spanish press as Enrique Tenreiro, shared a video on Twitter in which he’s seen kneeling down at Franco’s tomb and spraypainting in red the words “por la libertad” (‘for freedom’ in Spanish) and a scribble of a dove underneath.

Tenreiro was able to finish most of his protest artwork before security personnel at the Valley of the Fallen apprehended him at around 10:50 am local time.

The renowned ‘performance artist’ can be seen shouting “for the freedom and reconciliation of Spanish people, so that no side feels defeated” as he’s dragged away by a security guard.

“I’ve got nothing against Franco, it’s just for the freedom and reconciliation of Spaniards.”

Europa Press also quoted Tenreiro as saying “I’m not against the unity of Spain but Franco killed a lot of people.”

Spanish Civil Guard officers told the Spanish news agency that Tenreiro hadn’t been placed under arrest but is currently “under investigation”.

Metal detectors didn’t pick up the red paint Tenreiro was carrying as he’d switched it from a metal to a plastic tub.

The incident is the latest reaction to a fierce national debate over what to do with the body of Spain’s former fascist leader.

The dictator’s family would however prefer his remains to be laid to rest in Madrid’s central Almudena Cathedral, a suggestion the government prefers to avoid at all costs.

The Valley of the Fallen, built by Franco's regime between 1940 and 1959, holds the remains of around 37,000 Spaniards who died on both sides of the civil war but is seen as a symbol of Spain’s fascist past.