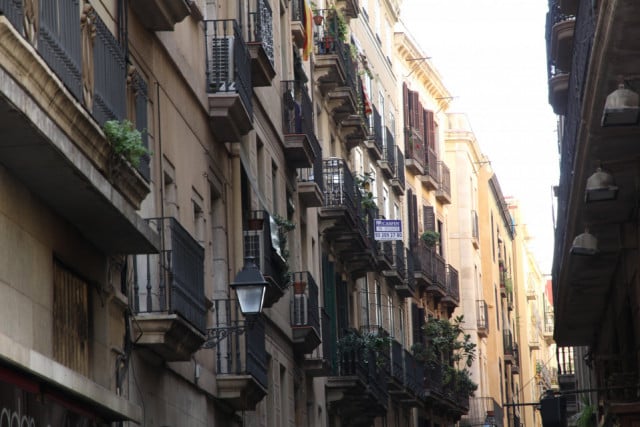 The thief had skilfully swiped the visitor's laptop from the back of his chair while he sipped a morning coffee at the bar. It had happened right under his nose without him noticing but luckily the bar had CCTV which had caught the whole thing on camera, including a clear shot of the thief's face.

Strauss took the visitor to the local police station and filed a report with the Mossos d’ Esquadra, the Catalan regional police force, believing that it wouldn't be too long that the thief was located and brought to justice.

Three weeks later, however, after failing to get a response from the police beyond “we are working on it,” Strauss was finally told that with 25 robberies reported each day in Gràcia, it was impossible for police to solve them all.

Strauss’ friend had become just another victim in a crime wave that is blighting Barcelona.

Anna Casellas, spokeswoman for the Mossos told The Local that so far this year in Barcelona they have made 330 more arrests than in all 2017.

Crime statistics show that in July, the number of incidents reported to police in Barcelona went up by 13.6 percent on a year earlier and by 21.1 percent in August.

The startling figure that stands out most is that violent crime within the Ciutat Vella, the old quarter of the city and the one bustling with tourists, has soared by 50 percent and the crime epicentre seems to be centred on El Raval.

So how safe is Barcelona?

.”During July and August El Raval became worse than the Bronx, it was insane”, said Santi Rodríguez, 39, (pictured below) a local resident in the neighbourhood of El Raval, , just a stone’s throw from the city’s touristy hotspots of Las Ramblas, Plaça Catalunya and the port.

Seated on the street outside his clothing store, he points down the street to a police patrol car, which he explains, is an almost permanent fixture in a bid to deter drug dealers and street fighting.

“My business has been hugely affected by rising crime,” he told The Local. “During the summer we were seeing about ten to 15 robberies around here each day.”

READ ALSO: Overtourism in Barcelona – are the battle lines drawn?

But now local business owners and residents are trying to reclaim the streets and clear up the neighbourhood. “We organize a street market on Saturdays and cook up a big paella on the corner that had become notorious for drug dealers.

“We are trying to give our street a brand new image.”

But unlike the optimistic Rodriguez, some older residents remain fearful of becoming victims of crime.

Rosario Aguilar, 55, and Consuelo Cabrerizo, 65, who have both lived in the same building for seven years (pictured above) share the same vision about the situation: El Raval is dangerous.

Aguilar admits that although she loves the vibrancy of the barrio, she has been frightened to go out on her own, since she was mugged by a man.

Cabrerizo adds that, while police have a bigger presence lately, it is still not enough.

“I will tell you this: do not walk around Carrer de Roig alone”, Aguilar warns.

Adorning the balconies on Carrer Roig, a thoroughfare at the heart of El Raval, are not the Estelada flags of independence but red banners that tell a different story.

Once upon a time, these banners marked the property as a place to buy drugs. Red meant no drug was on sale, blue warned of police presence and white indicated that drugs were available to buyers.

Now, local residents have taken over the symbol.  Red banners are strewn from their balconies in protest against the so-called ‘narcopisos’.

Next to the banners some have decided to use sheets to write their complaints about the situation. “El Raval cannot stand anymore” or “We want a decent neighbourhood” are some of the messages.

A bar welcomes by-passers entering Carrer de Roig, where Aguilar does not dare to enter alone.

On Carrer Roig,Jacinto Estévez’s bar has been open for 50 years. But he admits that the last three years have not been good.

Although things have cooled down lately, Estévez recounts daily fights and rows of drug addicts hanging around outside of the bar. “Crime has really taken a toll on my business”, he admits.

Locals ask whether the police are really doing enough to tackle the issue.

Although the Mossos confirm the rise in crime such as robberies, they insist they are working hard on cleaning up the area.

The force closed down 122 ‘narcopisos’ and arrested 158 suspects during 2017 and 2018, insists Casellas, the Mossos spokeswoman. In El Raval alone, 55 people have been arrested this year.

Barcelona’s Mayor, Ada Colau, has been lobbying for more resources to boost the police force in Barcelona and fight crime and in May, City Hall agreed to increase the budget for Ciutat Vella by €5 million and to send a task force of 63 officers to fight crime in the district.

“This is a complex topic that does not have magical solutions and requires coordination from all the administrations,” Colau said at the time.

A 5-minute walk separates El Raval from Las Ramblas, where tourists must run the gauntlet of pickpockets who plague the city’s most famous boulevard.

Hotels line the avenue, with one every few steps on both sides of the street. Marta Creus is a receptionist at one of them. She is the first face that guests see when they return to the hotel after sightseeing around the city.

And, as she explains, the first person they turn to when they get robbed. Creus admits that a lot of hotel guests are robbed. “The main targets for pickpockets are Asian tourist and the elderly,” she said.

As Kathy Swing takes a stroll down Las Ramblas she clutches her handbag in front of her chest.

Swing and her mother (pictured above) are American tourists and are aware that they are both represent potentially easy pickings for pickpockets. But five days into their trip and thanks to repeated warnings, they have remained vigilant and so far unscathed.

“The guide that took us on a bus tour kept reminding us to keep our bags in front of us and never leave them unattended”, Swing explained.

Many believe that crime is just part and parcel of living in one of the oldest quarters of the city.

Historians explain how drugs and prostitution are not newcomers to El Raval, and offer a clue as to why the place is conflictive.

Oriol Jiménez, a history professor in Barcelona, believes that Barcelona is the drugs and prostitution capital of southern Europe. His colleague, Nacho Peralta, elaborates on how El Raval grew as a neighbourhood where men from the rest of the city traditionally went to take drugs and pay for sex.

The fact that El Raval, whose origin lies in the Arabic word Arrabal meaning outskirts – used to be a suburb outside of the city’s walls made it the perfect spot for such insalubrious activities, to say nothing of its close proximity to the port.

At an information stand where tourists crowd round looking for city tours or tickets for Camp Nou, Stefanie Tavares, 24, (pictured above) plays down the crime effect on tourists.

“Some people express worries about pickpockets, especially South American and Asian tourists, but most don’t seem that concerned,” she said.

“It’s the independence movement and the terrorist attacks that have been worse for the city than rising crime”, Tavares insists.

READ MORE:The real reason why this Madrid barrio is the world's 'coolest neighbourhood'