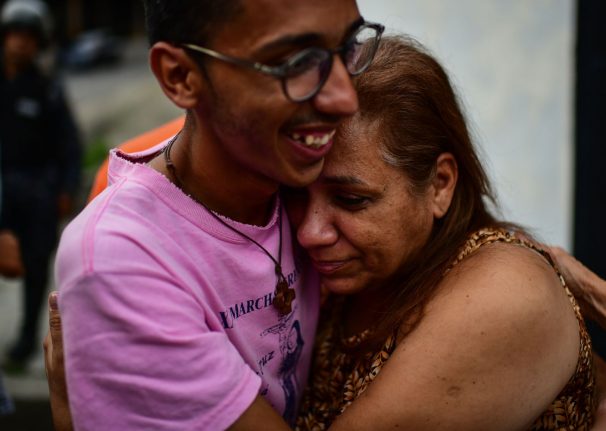 Venezuelan Yamileh Saleh (R), mother of opposition student leader Lorent Gomez Saleh, is embraced by a man outside the El Helicoide -the Bolivarian National Intelligence Service prison- in Caracas on

Emotional, the 30-year-old spoke to reporters and Venezuelans at Madrid's airport just a day after being freed from the cells of state intelligence services in Caracas.

“After four years I can see the sunrise, I saw it today,” he said.

His release — which was welcome by Spain on Saturday — was such a surprise that he was still digesting it, he said.

“In Venezuela there are innocent people behind bars,” he added. They “deserve to cross the bridge like I did”.

Authorities say the 52-year-old committed suicide by jumping out of a 10th-floor window of the state intelligence service headquarters. But his supporters and family say he was tortured to death and then thrown out.

Saleh had in the past denounced what he said was the torture inflicted on detained activists and the deaths in custody.

The Venezuelan regime is struggling to manage the fallout from economic collapse in the once wealthy country, whose leaders are under US sanctions.

Maduro, meanwhile, accuses the United States of manipulating the opposition in his country and of seeking to oust him.

Saleh is the president of NGO Operation Freedom, which works to promote human rights, democracy and civil liberties in Venezuela and the rest of Latin America.

He was kicked out of Colombia in September 2014 for illegal “proselytising activities” and the Venezuelan government says he has links with Colombian paramilitary forces.

In 2017, he was one of the recipients of the European parliament's prestigious Sakharov prize for human rights, which went to several Venezuelan opposition activists.