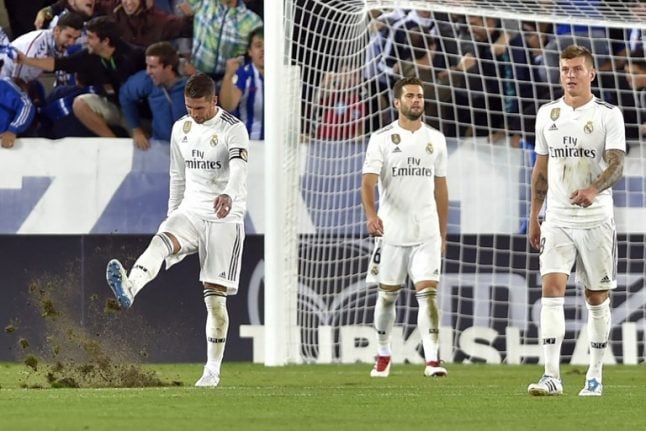 Real Madrid's Sergio Ramos (L), Nacho Fernandez (C) and Toni Kroos (R) react during their loss to Deportivo Alaves on Saturday. Photo: ANDER GILLENEA / AFP
The European champions were hoping for a boost after slipping to a surprise 1-0 defeat to CSKA Moscow in the Champions League, but Manu Garcia's 95th minute winner in Vitoria turned disappointment into disaster and after the  match, coach Julen Lopetegui was left to wave away questions about his future.
Here, AFP Sport looks at five things going wrong at Madrid:
1. Quality lacking up front
Losing a player who scored 30 goals for nine consecutive seasons would leave a gigantic hole for any team to fill but more surprising was Madrid's failure to buy an alternative to Cristiano Ronaldo.
President Florentino Perez was keen on Eden Hazard in the summer but backed off, while interest in the likes of Harry Kane and Robert Lewandowski also came to nothing.
Instead, Lopetegui has been left relying on Karim Benzema, who started brightly but has long said goodbye to his days of being a prolific scorer, and Mariano Diaz, lively in flashes, but yet to establish himself in the side.
Madrid are now paying the price.
2. Uncertainty in defence
Madrid's goal-scoring problems have been much-publicised but they are vulnerable at the other end too. Sergio Ramos has escaped criticism, despite a poor start to the season, summed up against Alaves, when he played two sloppy early passes before engaging in a series of skirmishes with striker Jonathan Calleri.
Thibaut Courtois was at fault for Garcia's winner and it cannot help those in front of him to have a rotating goalkeeper either. Lopetegui's policy of playing Courtois in La Liga and Keylor Navas in the Champions League feels like mollycoddling, when instead a clear decision might be required.
The inexperienced Alvaro Odriozola, in for Dani Carvajal at right-back, has come into a struggling team and looks nervous.
3. Creative players injured
Carvajal and Marcelo were key for Zinedine Zidane last season, offering cool heads in pressure situations and providing attacking impetus down the flanks too. Both have been out with calf problems during this difficult run and it is no coincidence Madrid have missed them dearly.
Lopetegui has been unlucky with injuries. Benzema was forced off at half-time against Alaves — although in truth he could have been substituted anyway — and Gareth Bale signalled to be replaced late on.
Bale also sat out the defeat to CSKA Moscow in the Champions League on Tuesday, as did Isco, who is recovering from an appendix operation. Replacements like Marco Asensio should have done better but a handful of
key absentees have left Madrid stretched.
4 .World Cup fatigue
Luka Modric admitted last month he felt emotionally and physically exhausted after leading Croatia to the World Cup final and he may not be the only one.
Raphael Varane, who was guilty of losing his man for Alaves' goal on Saturday, was integral to France's triumph in Russia while Courtois, Carvajal, Ramos, Nacho, Isco, Asensio, Lucas Vazquez, Odriozola, Marcelo and Casemiro were all involved in the knockout stages.
Madrid are not the only team affected but their summer was particularly short, given they also reached the Champions League final on May 26, less than three weeks before the World Cup.
“It was not easy to start again after those emotional moments,” Modric said.
5. Post-Zidane hangover
Following Zidane was always going to be something of a poisoned chalice. The Frenchman was immensely popular with the players, combining mutual respect with a relaxed style of management that gave them the confidence to deliver when it mattered.
He left on a high, after leading the team to Champions League glory for a third consecutive year, and it was perhaps no surprise the likes of Mauricio Pochettino, Jurgen Klopp and Massimiliano Allegri could not be convinced to take up the baton.
Lopetegui admittedly enjoyed success with many of Madrid's Spanish players while in charge of the national team but then left before finishing the job. Most of all, he is not Zidane.