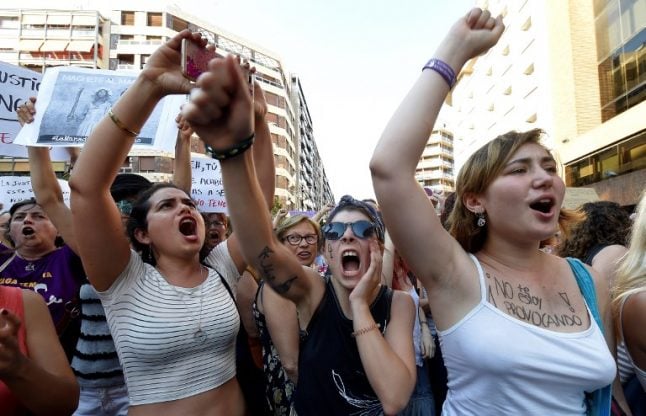 Spanish women demand justice after accused rapists were freed by a court in June. Photo: AFP
Here is a look at how five countries were affected.
France:
In France, where come-ons from men — even when unwanted — have long been treated as gallantry, the #MeToo movement has been divisive.
Thousands of women shared accounts of harassment or assault using the #MeToo or #Balancetonporc (Squeal on your pig) hashtags, but the wording of the French slogan rankled many, who accused the accusers of a witch hunt.
Among those who hit back was screen legend Catherine Deneuve, who signed an open letter by a group of 100 prominent French women defending men's freedom to “hit on” women and railing against the new “puritanism.”
Deneuve, who drew hefty criticism over the letter, particularly among younger women, later apologised to sexual assault victims while saying she remained opposed to social media “denunciations”.
Elected before the Weinstein affair broke, President Emmanuel Macron had already made fighting sexism a priority.
In August, parliament passed a new law that makes catcalling in the street a crime punishable by on-the-spot fines. French women protest sexual harassment. Photo: AFP
Sweden:
Sweden, a bastion of progressive gender policies, has not been spared scandal.
The venerable Swedish Academy, which awards the annual Nobel Literature Prize, was thrown into flux after several women accused the French husband of one of the academy members of sexual assault.
READ ALSO: Nobel Foundation warns it may strip Swedish Academy of literature prize
Jean-Claude Arnault, who headed an influential cultural club in Stockholm, was sentenced this month to two years in jail for rape. The allegations prompted the academy to postpone the 2018 Literature Prize by a year — a first in 70 years.
The government meanwhile seized the #MeToo momentum to push through a new law defining all sex without explicit consent as rape, irrespective of whether violence or threats are applied.
READ ALSO: Five things to know about Sweden's new sexual consent law Swedish actors read out anonymous reports of harassment. Photo: Jonas Ekströmer/TT
Spain:
Spain was slow initially to react to #MeToo but a she-said-they-said case of alleged gang rape brought thousands onto the streets in April and amplified calls for change.
Five men, who called themselves “The Wolf Pack”, had bragged in a WhatsApp messaging group about having sex with a teen during the Pamplona bull-running festival.
Accused of rape, they were convicted of the lesser offence of sexual abuse, prompting angry chants of “We women believe you” from demonstrators, which became the Spanish equivalent of the #MeToo slogan.
In July, the new Socialist government proposed to amend the rape law to introduce a Swedish-style condition of explicit sexual consent.
READ ALSO: Fighting the 'Wolf Pack': What's next for Spanish women? Protesters in Pamplona on April 28, 2018, demonstrate against a perceived lean sentence for five men accused of gang raping a woman at Pamplona's bull-running festival. Photo: Xabier Lertxundi/AFP.
Britain:
In Britain, sexual harassment revelations made heads roll in government.
Defence Minister Michael Fallon quit after being accused of groping a journalist and Prime Minister Theresa May's deputy, Damian Green, also resigned after being accused of inappropriate behaviour by a young activist.
Anti-poverty charity Oxfam and other NGOs also suffered severe damage to their reputations after several aid workers were accused of sexually exploiting people during missions in crisis-hit countries such as Haiti.
The government has promised to get tougher on harassment, particularly upskirting.
British police are also investigating assault claims against disgraced former House of Cards star Kevin Spacey, when he was in London between 2005 and 2008.
Russia:
In Russia, where officials openly brag about their machismo, the #MeToo movement made almost no inroads.
The only senior official to be accused of harassment, MP Leonid Slutsky, reacted scornfully to allegations that he groped journalists and made lewd comments. A parliamentary ethics panel cleared his name, however, and Slutsky claimed the scandal had actually “boosted my gravitas”.
President Vladimir Putin's spokesman Dmitry Peskov made no secret of his contempt for #MeToo.
Peskov labelled the actresses who accused disgraced Hollywood producer Harvey Weinstein “prostitutes”, maintaining they were more interested in making money than bringing Weinstein to book.