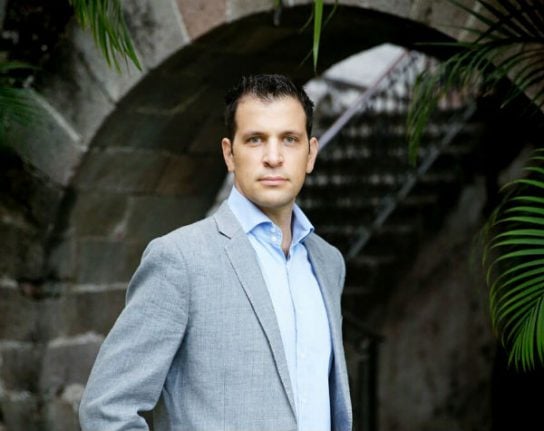 Luca Pisaroni is a bass baritone performing in Faust at the Teatro Real. Photo: Catherine Pisaroni

When I tell him this during an interview at Café Oriente, just a stone’s throw from where he is starring in Gounod's Faust at Madrid's Teatro Real, he laughs.

“You mean I am not fat,” the 43-year-old says in impeccable English with just a hint of an Italian accent. “It’s because you think we are all supposed to look like Pavarotti. But such a stereotype is something from the past. These days, opera singers take better care of themselves. I believe that if you are going to play a lover, then you have to be believable as a lover.”

Although in his current role he plays the demon, Méphistophélès, brought up to date as a tattooed, leather clad heavy metal rock and roller, a role in which he is equally believable. “I’m not a typical Italian, the type that everywhere he goes needs to eat pasta or pizza and believes that no-one cooks better than his mother. I like to try things wherever I go, that is the joy of travelling. Variety makes everything more interesting.”

He raved about Madrid, although admitted that with such a busy schedule taken up with performing, rehearsing or learning the part for a forthcoming project, he had little time to explore and enjoy it.

“The wonderful thing about this city is that you can find great food without having to go and look for it. There is a place round the corner that looks like nothing special, actually it is worse than that, it looks horrible but the food is great. And cheap. You could never eat so well for so little in London or New York.”

During the interview Pisaroni made a stark admission, a statement so shocking to hear from the lips of an Italian that he quipped he may never be allowed back to his motherland.

“I am convinced that jamon iberico is the best ham in the world. Far superior to the Parma ham (prosciutto) that my home city is famous for,” he confided.

“The taste is an incredible, special thing. It’s unique,” he continues.”Even though I don’t eat meat anymore I remember how good it was and have to tell the truth. They will take my passport back for saying that!”.

Pisaroni grew up in the town of Busseto, in the province of Parma, it may be the birth place of Verdi but Pisaroni’s career choice was far from inevitable.

No-one in the family was musical and it was only at the age of eleven when hearing a record played by his grandfather that he discovered opera. It was, he remembers, an aria from Verdi’s Don Carlo, sung by Bulgarian bass Boris Christoff.

“At that very moment, I was hooked,” he told me.”I thought to myself, that the human body could be capable of creating such a sound was incredible. Right then, I decided that the only thing I wanted to do in life was sing opera – luckily I discovered that I had the tool for the job. Then all I needed was dedication and lots of hard work.”

He expresses his fear that unlike him, children nowadays may not get the chances he did.

“In my time they taught music in school, but nowadays it is considered irrelevant. It’s not offered to everyone. I was in the choir at the local church. People don’t do that now,” he acknowledged.

“Making music together teaches one to harmonise, it’s a life skill. Teaching how to work as a team, to learn about each other and to compromise. You learn so much more than just the music itself.”

Pisaroni recounts how one of his most satisfying performances was to an audience of inner-city school children, aged between 8-13 at the Royal Opera House in London’s Covent Garden.

“They were so attentive, they so enjoyed it and when I came on stage for the curtain call, they treated us like rock stars! Kids don’t have prejudice, they experienced the performance without expectation and they were blown away by it.

“It is society that thinks that something written more than two centuries ago can’t be relevant, but I urge anyone who hasn’t been to an opera to come and experience it.

“You need to be in the theatre, to experience in person the sound an opera singer can make with their vocal chords, it’s really something special.”

He insists that this long held idea that opera is for the elite is nonsense.

“People think that they need to be knowledgeable about opera, to read up on it in order to enjoy it. But just allow yourself to be surprised. Somehow you will know what’s happening, even if you don’t understand the language. If there is a romantic scene, you feel it. In a moment of drama, the audience is gripped.

“Everyone should go to the opera at least once in their life. It’s wrong to think of it as expensive,” he says.”There are special offers and let’s face it, people will pay more for a ticket to see Real Madrid.” Luca Pisaroni is performing in Faust at the Teatro Real in Madrid.

Although he is an Italian, married to an American who has chosen to live in Vienna, where he spends less than two months a year, Madrid is one of Pisaroni's favourite cities. The Local discovered what he likes most about Spain's capital.

“I like that there is light from early in the morning until late in the day. The light is so dramatic here.”

“I love that there are so many parks in Madrid, it really is the sign of a civilised society. You can practically walk everywhere you want to go in Madrid.”

“Wherever you go in Madrid, people seem to be having a lovely time. They are very friendly and have an easy way of dealing with things.”

Although he has since given up eating meat, he remembers with delicious fondness jamon iberico.”I am convinced that jamon iberico is the best ham in the world. Far superior to the parma ham (prosciutto) that my home city is famous for.”

Apart from the ham, not eating meat isn’t difficult in Madrid.”I eat fish, eggs and cheese, so I eat well here. And I love tapas,” he said.

The timetable. (Sort of)

Spain is actually difficult for my schedule, having lunch at 2pm and dinner at 9.30 in the evening is too late for me. But actually it works well for the opera. We can go out and eat well after a performance.

“My first time at the Teatro Real was back in 2004, so it always feels a bit like home. The people working here are fantastic, we form a tight relationship over time from the people backstage to the make-up, wig department etc. It’s a relationship that is built up over time.

For me, Madrid’s Teatro Real is up there with London, Paris, Berlin. They are doing really interesting things, not just well known repertoires but obscure stuff and they are courageous when it comes to productions. They tend to get just the right balance between traditional and innovative.”

Everywhere Luca Pisaroni goes, so too goes his wife, Catherine, and their dogs, Lenny and Tristan.”I’m only at home in Vienna maybe a total of two months of the year. So I take my family everywhere I go. My wife can work from wherever she has WiFi and the dogs come too,” he explains.

“Madrid is great for dogs, I walk the streets every day for a couple of hours and when I have a morning or afternoon spare I hire a car and drive them to a place in the country in Navalcarnero where the dogs can swim.”