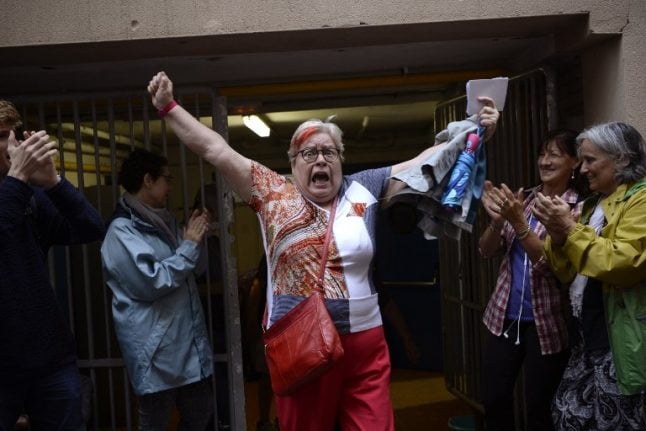 In this file photo taken on October 01, 2017 a woman celebrates outside a polling station after casting her vote in Barcelona. Photo: Josep Lago / AFP
“We risked everything for the referendum, we blindly believed them and now we see everything they promised was false,” says Adria, an angry independence supporter who is protesting against the regional, separatist government led by Quim Torra.
For the past four days, this 23-year-old has camped outside the regional government headquarters in Barcelona with around 20 other people to demand the republic promised a year ago.
“We'll be here until independence. We're just asking them to move towards setting up a republic, or resign and go home.”
'Historic' but not enough
The October referendum went ahead despite being ruled illegal by the Constitutional Court, and although it was marred by police violence, it was a “historic milestone”, says political analyst Josep Ramoneda. But a year on the “situation has become paralysed,” he said.
READ ALSO: Catalans deeply divided a year after independence referendum
Even if it was illegal and therefore non-binding, 2.3 million people cast their ballots out of 5.5 million eligible voters, 90 percent of whom voted to break from Spain.
And the images of police violence went round the world.
“The first of October was a disgrace for all of us because the image of Spain was suffering a lot,” Foreign Minister Josep Borrell said recently in New York.
For Ramoneda, it was a historic moment for the independence movement but also demonstrated its weaknesses.
“With two million people, you don't have the necessary tools to impose yourself unilaterally,” he adds.
A subsequent unilateral declaration of independence on October 27 was proof of that. No country recognised Catalonia and the Spanish government rapidly dissolved the Catalan parliament, deposed regional president Carles Puigdemont and called snap local elections.
Puigdemont and other Catalan leaders fled to Belgium and those who remained in Spain were jailed days later, accused of rebellion.
In the December polls, separatist parties once again won a majority in the regional parliament, even if only 47 percent of voters picked them in a system that over-represents rural areas which are more pro-independence. With Puigdemont unable to rule Catalonia from abroad, Torra was eventually picked to replace him.
He is loyal to Puigdemont and his Together for Catalonia grouping that formed a coalition with the leftwing separatist ERC. But strategies differ.
READ ALSO: Police clash with Catalan separatists at Spanish rally
'Many divisions' –
Those loyal to Puigdemont — including the CUP, a far-left separatist party which has withdrawn its support for the regional government — want to keep the conflict with Madrid alive.
But ERC and some from PDeCAT, Puigdemont's former party, advocate moderation and say the independence movement doesn't have enough support to continue on the path of unilateralism.
A staunch nationalist slammed as a supremacist by his rivals, Torra is trying to accommodate both sides. He gives heated speeches, calling for mobilisation and criticising Madrid. But at the same time, he takes part in fledgling negotiations with Spain's new Socialist Prime Minister Pedro Sanchez, who is less antagonistic than his conservative predecessor Mariano Rajoy.
“Under the table, there is cooperation with the central government but the official discourse remains the same,” says Joan Botella, politics professor at the Autonomous University of Barcelona. “The independence movement is divided into three parties and there is also a dividing line between the leaders who are outside Spain, those who are in prison, those who aren't… When there are lots of divisions, the situation jams up and no one is able
to take the initiative.”
And influential civil society groups which regularly mobilise hundreds of thousands of independence supporters to protest, are starting to be concerned.
On Monday, they will protest in Barcelona to mark the anniversary of the referendum and to ask that “the wishes of the majority of Catalan people be put into effect.”
“We're aware of the difficulties but we would like to resume the path to independence,” Elisenda Paluzie, head of the ANC association, told AFP. “We want to push ahead and avoid taking steps backwards.”
By AFP's Daniel Bosque