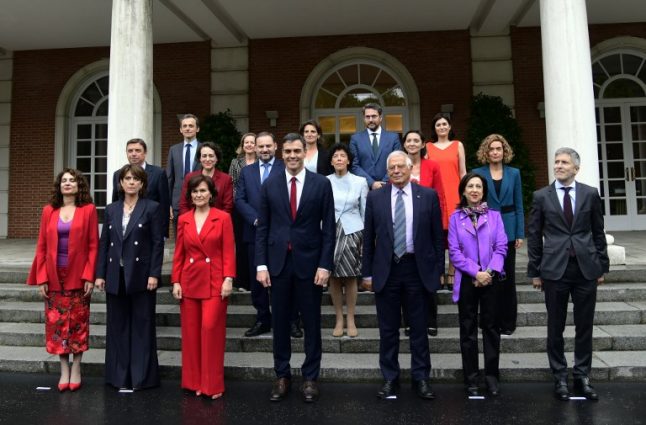 The first cabinet of Pedro Sanchez, pictured in June. Two have since resigned. Photo: AFP

Isabel Celaa, spokeswoman for the Socialist government, told reporters the list would be published in the state's official gazette on Saturday.

“This government is really moving forward on the path of transparency, which it believes is the only way to advance in democracy,” she said.

She also launched a blistering attack on the opposition, which she accused of “waging a campaign of harassment on the government.”

Her comments came after two ministers were criticised this week over information leaked to the media, sparking calls for them to resign.

READ MORE Behind the headlines: Why Spain's justice minister is facing calls to resign Justice Minister Dolores Delgado (pictured above) came under fire for having once met a former police chief under a corruption probe, as revealed in leaked recordings of her conversations with him.

Science Minister Pedro Duque, meanwhile, was forced to defend himself Thursday against allegations he avoided paying some taxes on his two homes.

Two other former ministers, meanwhile, have had to resign over accusations of wrongdoing.

Culture and sports minister Maxim Huerta stepped down in June in the early days of the Socialist administration after it emerged he had been fined for tax offences.

And health minister Carmen Monton quit earlier this month after reports of alleged irregularities in her educational qualifications.