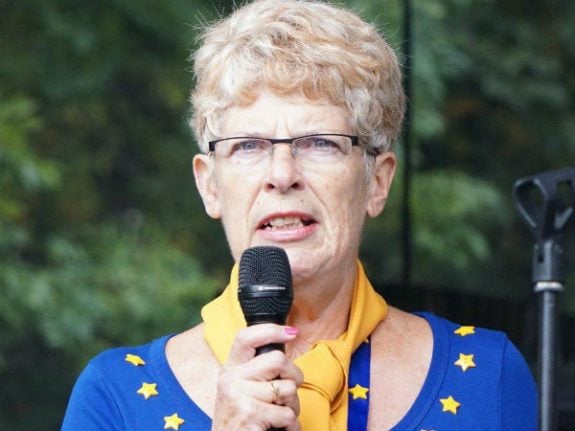 There has been much talk recently of the dire potential consequences of a ‘no-deal’ scenario, should the Brexit negotiations fail. With the recent publication of the last of the government’s own technical reports, there have been claims of scaremongering, contradicted by Brextremists saying, no need to worry, it all be fine – eventually.

Whether it’s the potential damage to the economy, job losses, rising prices, flights grounded, security concerns or the need to stockpile food and medicine, it all paints a terrifying vision of a post-Brexit future if May fails to secure a deal.

Citizens’ rights barely even warrant a mention, and even then, we’re much more likely to hear that EU citizens rights would be protected, whatever that might mean in May’s immigrant-unfriendly Britain. Meanwhile Brits in Europe are again inconvenient, ignored, invisible.

Everyday I am confronted by worried Bremain in Spain members who don’t know what to believe, who are concerned about their own and their families’ futures and who just want all this nonsense to stop. Many are so anxious at the prospect of a ‘no deal’ scenario that they are ready to accept any bad deal, rather than the worst case, cliff-edge scenario – anything that gives them a glimmer of hope.

It breaks my heart when I’m unable to ease their pain or reassure them that all will be well. However, I do not share that anxiety over the threat of a ‘no deal’ Brexit. On the contrary, I believe, as does the entire Bremain Council and many of our members, that ‘no deal’ is an impossibility.

It is not a view that is shared by many other groups in the EU. Others are busy drawing up contingency plans, much like the government is doing. Of course, it is wise to be aware of the potential dangers, and I would absolutely recommend that residents ensure they have all their paperwork in order. No harm in preparing for the worst whilst hoping for the best.

READ ALSO: Brexit planning: What you'll need to do if there's no-deal I have believed all along that the ‘no deal’ option being presented by the Prime Minister is a bargaining tool. To Theresa May, pointing out the disaster this is a ‘no deal’ Brexit serves two purposes: to threaten the EU into offering a better deal; to persuade the public and parliament to support whatever bad deal May manages to negotiate, as the alternative is so unthinkable.

The EU do not seriously believe that even the British government are crazy enough to choose a ‘no deal’ option, and cannot change their negotiating position, even if they wanted to. The ‘four pillars’ that safeguard the single market will be protected at all costs, as they should be.

As regards to persuading the UK parliament to support May’s deal, it is already clear that the Chequers plan is dead in the water, in Westminster and in Brussels. It is also a nonsense to suggest that should there be no deal, we would fall into a ‘no deal’ scenario by accident or default – parliament will never allow that to happen. Around 80% of MPs oppose ‘no deal’ and would never vote for it in a month of Sundays.

So where does that leave us? It’s becoming increasingly clear that whatever deal May’ manages to secure, she’s going to struggle to get parliament to vote for it. Labour have stated categorically that they will not vote for May’s deal unless it meets their 6 tests – an impossible target bearing in mind one of those tests states that the deal must give “the exact same benefits as we have now”. With SNP, LibDems and other parties also opposing the deal, only a handful of Tory rebels need to vote against the government for the deal to be rejected. Should the deal by necessity include the “backstop”, or some other assurance that will keep the Irish border open and protect the Good Friday Agreement, May might lose the support of the DUP too. The UK parliament are never going to accept a Hobson’s choice “meaningful vote” on a deal vs. ‘no deal’, so what would they vote on? Could an alternative be No Brexit? Another referendum, giving the public a say on the deal before we sign on the dotted line? Hard to say but anything is possible based on how much the political landscape has shifted in the last few months, and how much public opinion has changed as the true implications of Brexit, in whatever variety, are now widely known.

Whatever happens over the next few weeks, you can be sure there will be more shocks, more surprises and a lot more posturing and name-calling. The Brexit pantomime is set to run to many more nail-biting episodes, but never fear, the good guy always triumphs in the end. Sue Wilson is 64. She is married, retired, and has lived in Spain’s Valencia Community for 11 years. She is Chair of Bremain in Spain, a pro-European campaign group, which is a member of the coalition of British groups in the EU, British in Europe, as well as being partners of European Movement UK and members of Britain For Europe.

Sue is currently lead complainant in a legal challenge against the Prime Minister, which questions the validity of the referendum & the decision to trigger Article 50.