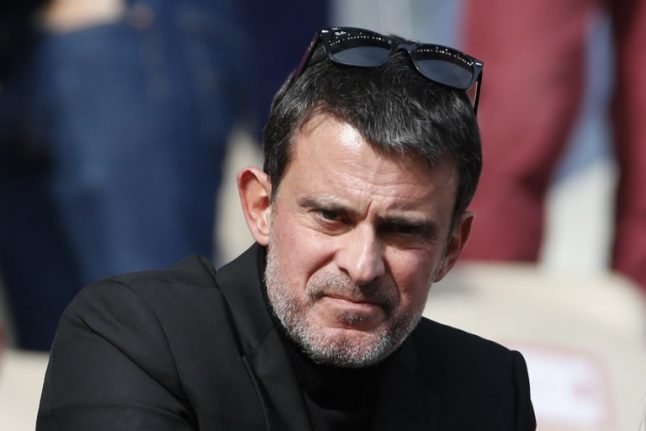 Manuel Valles grew up in Paris with his Catalan father and Swiss-Italian mother. Photo: AFP

After weeks of suspense, the former Socialist premier is due to unveil “his decision” at 7:00 pm (1700 GMT) in the old centre of Barcelona, Spain's second biggest city where he was born 56 years ago.

People close to Valls, who grew up in Paris with his Catalan father and Swiss-Italian mother, say he is all-but certain to stand as a candidate for the mayorship of the Catalan capital in municipal elections on May 26, 2019.

On Friday, Valls tweeted an enigmatic photo of his feet on paving stones with the word “Barcelona…”. The email sent to invite media to Tuesday's briefing came from an address named “Valls 2019”.

Since failing to become the Socialist candidate for the 2017 French presidential election — then failing to join forces with winner Emmanuel Macron — Valls has regularly campaigned in Spain against Catalan separatists  who attempted to breakaway from Spain last October.

If he decides to stand for mayor after a high-level political career in another country, it will be an unprecedented move in European history.

What are his chances? Beating Ada Colau, a former housing activist who is the current mayor of the 1.6-million strong city, will be a tough challenge.

Valls will have the support of centre-right party Ciudadanos, which is spearheading opposition to the independence drive in Catalonia.

He has recruited a former communications director of FC Barcelona, the giant football club he supports, for his campaign.

The former right-hand man of Barcelona's ex-Socialist mayor Pasqual Maragall, still popular for his role in the city's successful Olympics bid in 1992, will also join his team.

But “his chances of becoming mayor are slim,” says Jordi Munoz, politics lecturer at the University of Barcelona.

He says Valls has so far not managed to persuade the two other anti-independence parties – the Socialists and conservative Popular Party -to back his candidacy.

And his firm stance on public order, as shown in France when he was interior minister, may not go down well in the traditionally leftwing city.

The exiled pro-independence former president of the region Carles Puigdemont, was dismissive of Valls's possible candidacy.

“He's a candidate who doesn't know Barcelona, who's not known in Barcelona,” Puigdemont told AFP in Brussels.

Once a popular figure in France, Valls has been strongly criticised for ditching the Socialist Party and unsuccessfully trying to run for parliament for Macron's centrist grouping.

He failed to join forces with the winner of the election, Emmanuel Macron, and to enter parliament in Macron's centrist grouping.”I don't know what he's coming here for. I reckon that as no one wants him in France, he's coming to Barcelona,” Laura Bozzo, a retiree, says in front of the city hall.

“He was born here but doesn't know the city,” she adds, wearing a yellow ribbon to show her support for jailed pro-independence politicians.

“He's a prestigious person, with international recognition and he can improve Barcelona's image.”