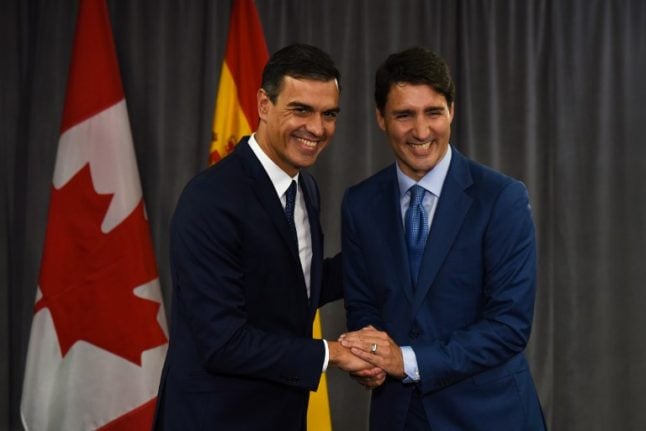 The pair held a bilateral meeting followed by a press conference in which the issue of Catalonia was high on the agenda.

Trudeau was asked whether he supports the right of the northeastern region to vote in a referendum on independence, as the people of Quebec have done twice, in 1980 and 1995.

“Obviously I recognize this is a delicate internal matter and I have confidence in the Spanish people and all different governments to move forward with a way that is respectful with freedom of expression, of values, human rights, the rule of law and the Spanish constitution,” Trudeau said. He added in French that he believed “all levels of government” were working towards a solution, and that the issue wasn't one that came up in his discussions with Sanchez.

Comparisons have been drawn been independence movements in Catalonia and Quebec, the French-speaking Canadian province with a decades-long independence drive. In the wake of last October's failed referendum in Catalonia, Quebec's political parties unanimously adopted a motion condemning what they called the “authoritarianism” of the Spanish government's actions in Catalonia.

But Sanchez and Trudeau said that their conversation had instead been focused on mutual co-operation between their two nations touching on issues such as gender equality, security, migration, and bilateral trade. It was the second formal meeting between Trudeau and Sanchez, who first met at the NATO summit in Belgium in July, shortly after Sanchez was sworn in as prime minister.

Busy day in Montreal with PM @sanchezcastejon, focused on how Canada & Spain can work together to fight climate change, advance gender equality, and create new jobs & opportunities for people on both sides of the Atlantic. More: https://t.co/JmaoUiSI1s pic.twitter.com/19Q1vLcxIW

With both leaders celebrated for their better-than-the-average politician good looks, the meeting provoked inevitable headlines back in Spain.
El Español dubbed the meeting “Duel of the handsome men in Canada” and produced a comparative guide of their assets in a bid discover who could be crowed “Mr G20”.