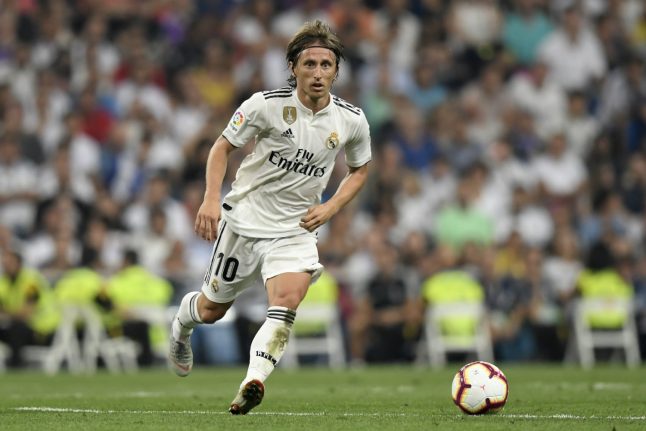 The Croatian star, one of the favourites to win the Ballon d'Or in December, has been accused of evading 870,728 euros on revenue from his image rights in 2013 and 2014 via a shell company set up in Luxembourg.

In January, the 33-year-old gave evidence to a court that he had already paid tax authorities close to one million euros — the sum he allegedly evaded plus interest, a judicial source told AFP at the time.

According to El Mundo, which is consistently well-informed on tax fraud issues involving footballers, the deal reached with prosecutors involves him paying a fine that represents 40 percent of the amount allegedly evaded — or just under 350,000 euros.

Modric can also convert his jail sentence to another fine of 250 euros a day, which would total around 60,000 euros, the report said.

That would come on top of the one million euros he already paid, it added.

Neither prosecutors nor the court involved in the case would comment when reached by AFP.

The news comes just two days before football's world ruling body FIFA awards its best player of the year prize, for which Modric is a finalist along with Portugal's Cristiano Ronaldo and Egyptian forward Mohamed Salah.

Modric is also a firm favourite for the Ballon d'Or, the prize awarded by France Football magazine to the world's top player as voted on by journalists around the globe, in December.

A number of high-profile players have fallen foul of Spanish tax authorities in recent years.

Cristiano Ronaldo, for instance, accepted to pay 18.8 million euros and receive a two-year jail sentence that he will not have to serve.

Lionel Messi, though, went to court where the Barcelona star was fined 2.1 million euros for tax fraud and given 21 months in jail, which was subsequently converted into another fine.