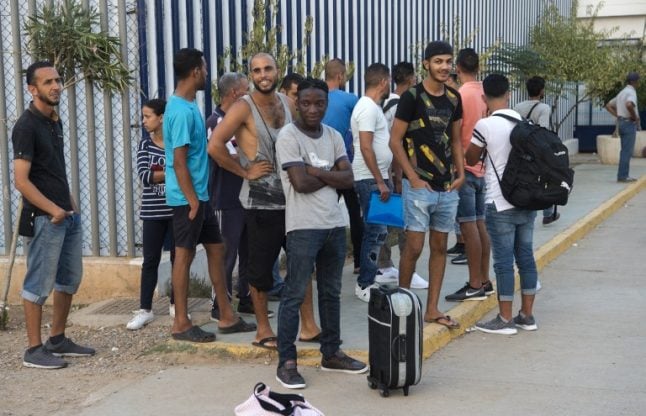 Migrants stand at platform as they wait to leave the temporary centre for immigrants in Melilla. Photo: Fadel Senna / AP

He is one of thousands of would-be migrants in the kingdom, dubbed “harraga” in Arabic, referring to those prepared to risk it all to reach mainland Europe.

“Everyone wants to move,” says the young man from the city of Fez, his hood pulled up and his trousers smeared in engine grease.

Fleeing “misery and injustice” at home, he says he is looking for a ticket to a “European paradise”.

But his journey is not over yet.

To cross the Mediterranean, he will have to cling to the chassis of a truck boarding a boat, or to the mooring lines of a ferry leaving for Spain. A boat full of migrants crossing the Straits of Gibraltar to Spain. Photo: AFP

Further back from the coast in Melilla's highlands, 23-year-old Hamid stares out across the harbour, closely eyeing its criss-crossing vessels.

“You can't live in dignity with that,” says Hamid, who has never learnt to read or write.

“I know fathers who have families who want to leave — people are desperate,” he adds.

South of Melilla in the Moroccan coastal town of Nador, groups of young men gather on sidewalks, killing time watching busses and trucks en route to the autonomous Spanish city.

“Since the beginning of the year, the number of Moroccans like them looking to migrate has exploded in Nador,” a Melilla resident tells AFP.

The number of Moroccans daring to reach Europe by sea has “increased considerably in recent months”, says Aziz Kattouf, head of the Moroccan Association for Human Rights (AMDH).

According to Kattouf, leaving has become “easier” and is done “often with out an intermediary… (the migrants) pitching in to buy a boat motor in front of everyone”.

A lack of official data means the actual number of Moroccans making dangerous and sometimes deadly bids to reach Europe is unknown.

Since early 2018, Spain has logged more than 38,000 arrivals, according to the International Organization for Migration (IOM). A Syria migrant gestures as he leaves with his family the temporary centre for immigrants and asylum seekers in the Spanish enclave of Melilla. Photo: AFP

For their part, Moroccan authorities say that since January they have prevented 54,000 attempts to reach Europe. According to figures from the government spokesman, these included 7,100 Moroccans up to the end of August.

For weeks, Moroccan social media networks have been inundated with videos showing smiling youth brandishing the victorious V with their fingers as they board small rubber boats headed illegally for Spain.

On Wednesday, Morocco's interior ministry sent a memo to local media warning against videos “fundamentally intended to mislead public opinion” and announcing the launch of an investigation.

According to the AMDH's Kattouf, most Moroccans trying to reach Europe come from that area, which has been wracked by protests in 2016 and 2017 over its marginalisation.

“There is a lack of confidence in the projects announced (for the Rif), and an atmosphere of despair has been accentuated by the severe sentences handed to the movement's political detainees,” said Kattouf.

In June, activists put on trial for links to the region's social protests were handed sentences of up to 20 years.

Home to one of the continent's most developed economies, Morocco remains marred by major social inequalities, according to official statistics. At the migrant centre in Melilla. Photo: AFP

Young people in the kingdom, who make up a third of its population, have been particularly marginalised.

More than one out of every five migrants in Morocco is under the age of 19, according to the IOM.

Mbarek, a 25-year-old bricklayer came to Nador from Tinghir, 700 kilometres (430 miles) south, to follow in the footsteps of “friends who've gone to Europe”.

“In the construction sector, you're not an official employee, you're not protected — you can die while doing your job and no one will care about you,” he says, as fellow travellers nod in agreement.

From the southern semi-desert town of Zagora, 19-year-old Ismail says he has tried to make the journey twice — each time clinging to the underside of a truck, watching “death” pass beneath him on the road to Almeria, Spain.

Both times he was caught by Spanish authorities and expelled. But he is not about to give up.

In Morocco “we're treated with cruelty. Harraga are seen as less than nothing, isolated and marginalised,” he grumbles.