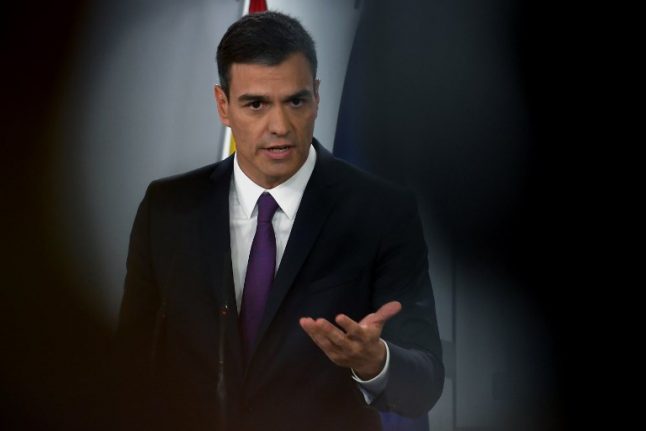 Pedro Sanchez is now in the eye of the storm. Photo: AFP

“The information appearing in certain media claiming the existence of plagiarism in my doctoral thesis is absolutely FALSE,” Socialist Sanchez tweeted just two days after Carmen Monton quit as health minister amid reports of irregularities in how she obtained her degree.

Spanish media said Monton had been awarded grades without attending classes and that her final project contained plagiarised passages — charges she denied.

“I shall take legal action to defend my honour and dignity if what has been published is not rectified,” Sanchez said, referring to a front-page story by conservative daily ABC saying Sanchez used “cut and paste” to produce his doctoral dissertation.

The article claimed the premier's paper on innovations in Spanish economic diplomacy, written in 2012 when he was a professor of economics in Madrid, included sections lifted almost word for word from an article by fellow economists as well as a presentation by a former industry minister.

The leader of the centre-right Ciudadanos party Albert Rivera on Wednesday urged Sanchez in parliament to publish the dissertation, suggesting there were “reasonable doubts” that needed public clarification.

“The thesis has been published in accordance with the rules,” replied an angry Sanchez, in power only since June when his Socialists replaced the conservative Popular Party mired in allegations of corruption.

His government is a minority administration with just 84 lawmakers in a parliament of 350.

To date, Sanchez's thesis is available only at a university library just outside Madrid. It cannot be consulted online and cannot be photocopied, presaging a rush by journalists on the library concerned.

Opposition leader Pablo Casado has also been facing calls to step down, with his own academic record questioned.

He allegedly obtained a master's degree from King Juan Carlos University without attending classes or turning in a final dissertation.