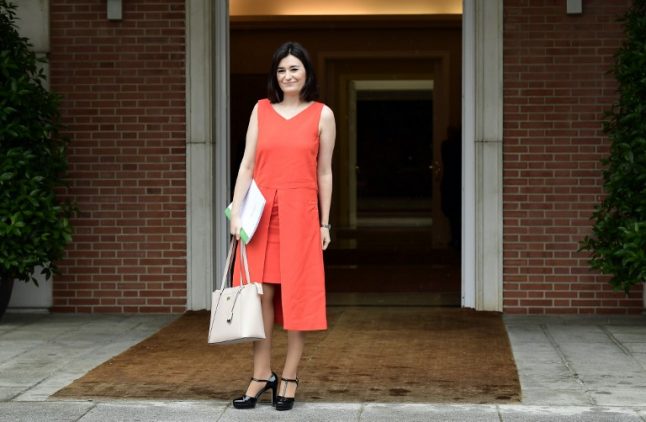 Carmen Montón arriving for her first cabinet meeting back in June. Photo: AFP

“I have communicated to the head of the government my resignation,” Monton told journalists.

She said she had been “transparent and honest,” done nothing wrong and her conscience was clear.

Prime Minister Pedro Sanchez came to power promising a fresh start after ousting conservative Mariano Rajoy and immediately won praise for appointing a cabinet made up mostly of women.

The gloss of his minority administration was dented quickly however when culture and sports minister Maxim Huerta resigned shortly after taking office when it emerged he had been heavily fined for tax fraud.

Monton, 42, found herself in the spotlight because of her masters from University Rey Juan Carlos, following a scandal dubbed “mastergate” over how it awarded its degrees.

The uproar has also affected opposition leader Pablo Casado, after he admitted that he had obtained a masters degree at the same university without even having attended a class or passed an exam.

A bench of the Supreme Court is to decide shortly whether an investigation should continue into whether Casado was party to corrupt acts.

Casado has repeatedly refused to resign and his Party Popular has stood resolutely by him.

Another PP figure, Cristina Cifuentes, however was forced to resign as head of the Madrid regional administration after doubts were raised about her qualifications from University Rey Juan Carlos.

It seemed to show the existence of an old-boys network doing favours at the university with the aim of creating a network of influence, he added.

University Rey Juan Carlos said in a statement that there had been manipulation of her results and that it was examining Monton's case “so as to establish responsibilities”.