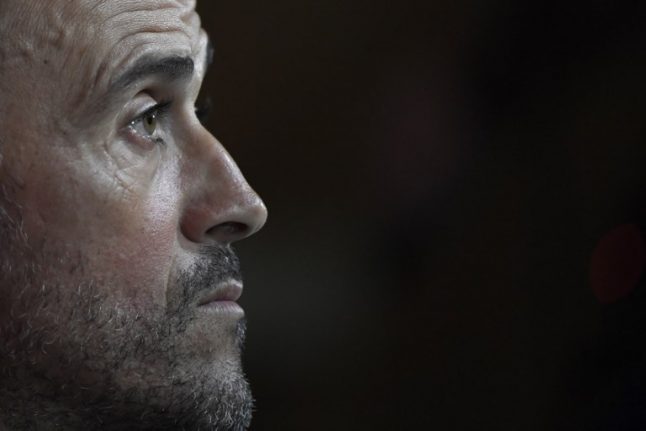 “I have nothing to apologise for,” he shrugged. “I didn't show anyone a lack of respect.”

Barça's form had dipped but they would still win the domestic double a month later, one year after he had led them to a brilliant treble in his first season, matching the achievement of Pep Guardiola in 2009.

A year later Luis Enrique would be gone, after winning six of nine major trophies up for grabs, and yet he left the Camp Nou respected more than he was loved.

Now he brings his meticulous, single-minded, dynamic, prickly, all-or-nothing style to the Spain dugout, ready to undergo his first test at Wembley against England on Saturday.

When the fixture was announced in May, as part of the inaugural UEFA Nations League, few would have expected it to be the visitors confronting questions about style, youth and an under performing goalkeeper, following a humiliating World Cup exit.

The new coach's press appearances so far suggest he will carry that same edge felt by the journalist two years ago into international management, and it remains to be seen whether it proves a source of unification or alienation amongst his players.

“Luis Enrique lays down the law”, read the front-page headline in sports daily Marca on Wednesday, with a new set of rules listed, including a ban on mobile phones, earlier bedtimes, fines for lateness, fewer days off and a streamlined training-ground buffet.

But David de Gea allowing Cristiano Ronaldo's shot to skip off his hands was not the cause of Spain failing to break down Russia before losing to the hosts on penalties at the World Cup, and neither was a penchant for texting or fried food.

More deep-rooted are the doubts about Spain's possession game, so revolutionary during the golden years of 2008, 2010 and 2012, but now seen by some as a millstone around their necks.

High-pressing, quick transitions and counter-attack have become the buzzwords of club football and there is a sense Spain have been left clinging, out of sentiment or even pride, to a style many opponents have worked out.

Even before Julen Lopetegui was lured away by Real Madrid on the eve of the World Cup, throwing their tournament into chaos, Spain's preparations had ended with a plodding 1-0 win over Tunisia and a 1-1 draw with Switzerland.

Luis Enrique knows better than anyone the pitfalls of tweaking an identity both entrenched and once adored.

“We have to evolve that idea, perfect it, make it even better, so we can surprise opponents and they don't know how we will play,” he said upon taking over at Barcelona.

At Barça, Luis Suarez became a motif for the high press and occasional straight ball over the top. But even when they were winning, many at Barça were still not convinced by his style, and when they were losing, it was a big stick used to beat him with.

After starting at Sporting Gijon, he played for both Real Madrid and Barcelona. His strengths as a player, and perhaps even now as a coach, lay in his energy, dynamism and versatility, more than subtlety or craft.

Spain should be more open to tweaking on the back of failure at three consecutive major tournaments. Only Sergio Busquets and Sergio Ramos remain from the team that triumphed in 2012, with Gerard Pique, David Silva and Andres Iniesta all retiring after the World Cup, and Jordi Alba surprisingly jettisoned from this opening squad.

Luis Enrique's task is to find the sweetspot between the old Spain and the new. He will not worry who he upsets along the way.