Canary cuisine is a literal melting pot of North African, Latin American and Spanish flavours. Here are seven delicious dishes to try on your next visit to the archipelago of eternal springtime.

Long before tourism arrived on Canary shores, Berber tribes from North Africa crossed over to the archipelago, bringing with them the culinary traditions of the Sahara.
Several centuries later when the islands had been conquered by Spain, a Genoese sailor by the name of Christopher Columbus stopped on the island of La Gomera before sailing off across the Atlantic to what he thought was India.
This poignant pit stop turned the Canaries into a major port of call for voyages to and from America, and with all the passing sailors came new plants and spices that added more flavour and character to Canarian dishes.
A satellite picture of the seven Canary Islands. Photo: JEFF SCHMALTZ/NASA/AFP
That’s left all seven Canary Islands with a vast array of tantalising mojo sauces, beautiful potatoes (yes, that’s their real name) and more award-winning cheeses than we can count.
Here are some of the best Canary dishes you should definitely try.
Papas arrugadas con mojo
Let’s start off with the obvious: the Canary Islands’ famed wrinkled potatoes with the sumptuous mojo verde and rojo sauces. A simple pairing of incredible taste and quality.
Small Canary potatoes, usually papas bonitas (aptly named beautiful potatoes) are boiled with their skin on and with ample sea salt, then left to dry and wrinkle.
Then there’s the green and red mojo sauces that feature regularly on this foodie list because, as you will read later, they’re that delicious they go with pretty much everything.
Papas arrugadas con mojo comes with many traditional meat and fish-based Canary dishes. Who would have thought a potato-based side could be voted Spain’s number one gastronomic marvel in a 2016 survey? That’s how good they are! Photo: Iain Cameron/Flickr
Conejo al salmorejo
You may have tried salmorejo before – the delicious cold tomato-based soup slurped up all across Spain in summer– but this dish and its sauce are only similar in name.
Conejo al salmorejo is a wonderfully flavoursome rabbit stew cooked for a whole day in a marinade of wine, pimenton, garlic, olive oil and other ingredients.
“¡Está de rechupete!” which roughly translates to as finger licking good. 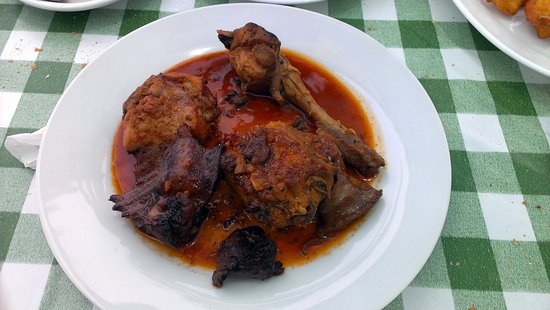 This photo of Casa Picar is courtesy of TripAdvisor

Being stuck out in the Atlantic Ocean has its perks, especially if you’re a sucker for fresh seafood and fish.

One of the favourite marisco (seafood) dishes of Canarios is grilled limpets with, you guessed it, mojo sauce. 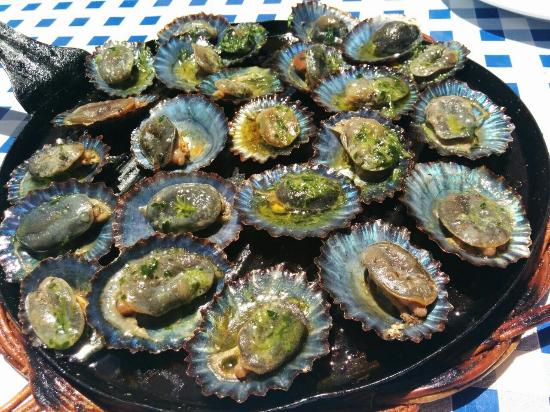 If it’s not on the menu don’t worry as you’ll find it hard to go wrong with pretty much any seafood dish in the Canaries.

If you do have room for another one, try potas en salsa, a type of cuttlefish stew.

Queso asado con mojo
Cheese from the Canary Islands deserves a feature of its own (and if we ever make it to the World Cheese Awards we promise we’ll do just that!).
Last year, 36 cheeses produced in the Canary Islands received prizes at the contest, more so than any other region in Spain. Photo: Tripadvisor
Queso asado con mojo, grilled cheese with mojo sauce, pairs two of the Canary Islands’ most scrumptious ingredients.
A lightly grilled soft goat’s cheese, sometimes semicured, is served with mojo verde, a cilantro-based sauce which also has garlic, olive oil and garlic, or with mojo rojo or mojo picón (red or spicy mojo), made with pimenton pepper, cumin and other spices.
There should always be room for this tapa on your table, especially if you’re a cheese lover.
Gofio escaldado
Gofio was the staple food of the Canary Islands’ original inhabitants, the Guanches, and still remains a crucial ingredient of many Canary dishes to this day. Most famous of all is perhaps escaldón de gofio or gofio escaldado, a scalded mix of roasted grains like maize and wheat (the gofio) with fish broth. 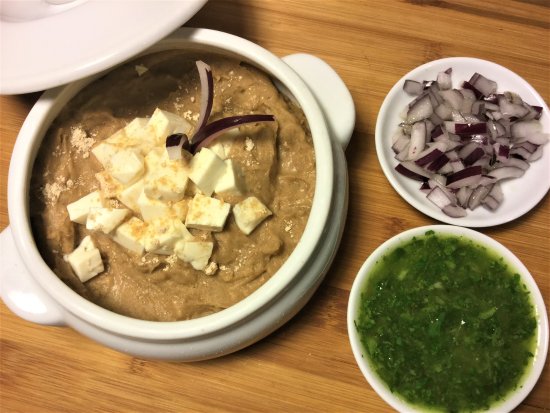 This photo of Dandy Canary is courtesy of TripAdvisor
Canarios swear by it but it’s perhaps the dish on this list that will please least palates, as the earthy consistency and dryness of the gofio mush in itself proves a bit hard to swallow for some.
Still, gofio is so quintessentially “canario” that you have to try it at least once if you find yourself in the archipelago.

Puchero canario
This is the sort of hearty Canarian dish you’re likely to eat at the archipelago’s traditional Romería pilgrimages and festivities, or every other week if you’re lucky enough to have a Canarian grandmother cooking for you.

It may look rustic in its preparation and presentation, but this casserole with everything from chickpeas, chicken, chorizo, pork, maize, bubango (Canary courgette) and many more ingredients exemplifies the quality and freshness of local ingredients, which allows them to just keep it simple.
Photo: El coleccionista de instantes/Flickr
Frangollo
We have to end on a sweet note, even though there are countless more savoury dishes, cold meats and other condiments worthy of recognition.
Frangollo is a Canarian dessert dish, made from milk, millet or maize flour, lemon, eggs, sugar, butter, raisins, almonds, and cinnamon.
It may not have the va-va-voom of French or German pattiserie but its tasty, healthy and has lived on in the Canaries for centuries.
Another Canary dessert worth mentioning is the incredibly literal bienmesabe, which translates to “it tastes good to me”, one for the real sweettooths out there. 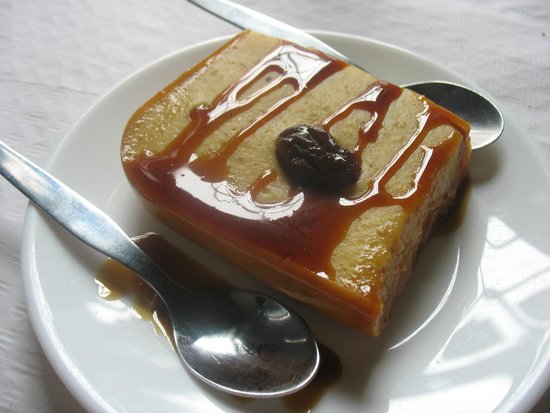 Questa foto di Bodegon Plaza – Casa Juan è offerta da TripAdvisor.
And if you’ve still got room for more…
We can’t leave without mentioning fish. As you can imagine most of it goes from the sea to your plate in about sixty seconds, so you can’t really beat fish-based dishes from the Canaries in terms of freshness.
Local species such as cherne (stone bass), dorada (sea bream) and bacalao (cod) are all exquisite when grilled and served with the magical pairing of wrinkled potatoes and mojo.
Dorada fish. Photo: Cristina Verde y Romero/Flickr
And if you can really squeeze in a few more bites ask the waiter for some Almogrote Gomero, a sensationally strong cheese, red pepper and pimentón spread from La Gomera that you won’t forget.
Photo: Deposit Photos